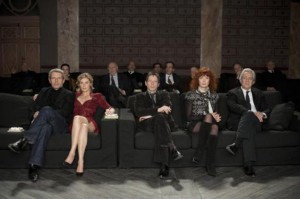 Alain Resnais’s latest riff on familiar themes is a knowingly and distinctly cinematic work, in which a group of actors are brought together by Antoine d’Anthac, a recently-deceased theatre director with whom each has collaborated over the years, on adaptations of Jean Anouilh’s play Eurydice. Arriving at d’Anthac’s estate like successive entrants to Celebrity Big Brother, the group sits down to be greeted by d’Anthac from a television monitor. He has assembled his friends to ask them to watch a filmed, low-budget version of Eurydice, to see if they agree it warrants another production.

As its title suggests, You Ain’t Seen Nothin’ Yet (Vous n’avez encore rien vu) has a quietly mischievous air to it, an informality that threatens to undercut the ceremonial theatricality evoked by this congregation of French stars, which includes Mathieu Amalric, Pierre Arditi, Sabine Azéma and Michel Piccoli, all of whom play “themselves”. Given Resnais’ recent renaissance, following Wild Grass (2009), the title’s second-person address and casual boast-cum-promise bring healthy cheek to a film that seems, at 115 minutes, an exhausting variation of familiar material. Directing a script from Laurent Herbiet and Alex Réval, Resnais plunges headlong into his own film’s self-reflexivity and, like Antoine d’Anthac, seems to have returned to comfortable territory only to see if he can invest something new.

Thankfully, he keeps things performative, artificial and melodramatic enough to prevent everything from becoming po-faced. He also foregrounds the language of cinema: iris-pulls, split-screens, backdrops, blue screens, close-ups and montage allow for the kind of spatiotemporal manipulation denied by the stage. As the film unfolds, a discernible pattern emerges that helps anchor an otherwise fragmented narrative: the two leading couples with whom d’Anthac adapted Eurydice re-enact scenes from that play, and in the film/play’s (literal) third act, Resnais’s takes become more prolonged and less anxious. Consequently, we’re drawn more and more into each scene, unable to decide if we’re excited more by the play itself or the actors performing it, as each gesture seems to carry with it a performer’s longing to return to and rediscover old sparks.

Here, fictions remain present and continue to haunt the lives of those who have created and performed them (in the background of one scene, we spot a poster for Resnais’s 1959 debut, Hiroshima mon amour). As a film whose basic premise is set up posthumously by a director (or is it…?), You Ain’t Seen Nothin’ Yet invokes swansong qualities, and melancholy and death permeate it throughout. If this turns out to be Resnais’s final film as expected, though, we may take it as a fitting and contented conclusion, which itself concludes with a magical resurrection and the nostalgic appraisal of Sinatra’s “It Was a Very Good Year”.

‘You Ain’t Seen Nothin’ Yet’ was part of the London Film Festival’s ‘Dare’ strand.