Remade into a television series, this 1987 filma still resonant s but also feels from a past date. Corrine’s (Victoria Tennant) husband is killed in an accident. Her idyllic life is shattered and her children’s lives will never be the same again. Sons Chris (Jeb Stuart Adams)and 5 year old Cory, daughters Cathy (Kristy Swanson) and 5-year-old Carrie must now live with her extended family. As they arrive, everything feels different. The children are forced to be separated from their mother. They will live in a room all alone, with only the access to a huge attic available to them. Everything they require is up there, except food which is brought to them. Their mother is kept elsewhere in the mansion. She is allowed to visit them once a day but not affection or emotions are allowed to be shared. As they days go by, they see their mother less and less. As they explore the attic, more and more they discover that a family secret could destroy everyone… 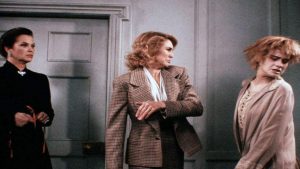 Flowers in the Attic makes the case for VHS as the greatest liberalising force cinema ever saw. This might be slightly flippant but for me it illustrated why the format was so powerful. You see this film flopped at the box office. It was a mess according t some. Stayed away from the books power accorded others. In truth the only really salient points raised in objection to it from the periods critics are that it is poorly paced and unevenly acted. Yes it is poorly paced. Being about 20 minutes too long and focusing on the children’s journey too much and not enough on the development of the rationale behind what is happening. 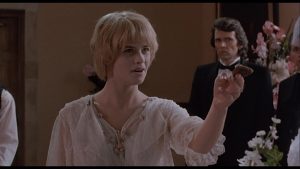 As for acting, well the children are serviceable but the lead in Victoria Tennant is bland and lacks dynamics. You care so little for her and it drags due to this. However on its VHS release it did very well and I remember this. Flowers in the Attic attempts to be a cross between family melodrama and exploitation 1960’s esque pot boiler. Those films sort to sensationalise the dark heart of suburbia or bring about talking points. This doesn’t do this. Flowers in the Attic is simply a film that explores Gothic and mixes it with the psychosis of domesticity. Extracting a half decent film which in its end, is just off the mark.

The transfer is a step up from that VHS copy. The colour correction is a really nice touch after having such awful raining issues in previous releases.  The audio has some freshness and cancels the fuzz from static of that awful VHS. Ellinger has a great time telling us all about the film but I am going to say respectfully to the brilliant Kat, could we hear more voices talk about works and not just the same as before Arrow? DOP feature has to be watched as this is a film which shows that craft with such aplomb. The really worthwhile extra is that Craven script. I wish that had seen the light of day… 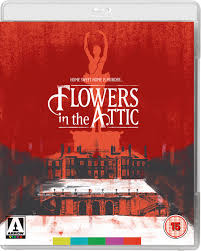