Based on Fyodor Dostoevsky short story of the same name, this is a Russian film about a journey. A journey can often lead you to find yourself. It can lead you near or far, short or long, take days or years. But it will always be prefigured by the person asking their self a question. In A Gentle Creature this is the motivating factor. When a woman (Vasilina Makovtseva) receives a return to sender parcel sent to her husband, she asks what has caused this. The thought is that her package has failed to arrive because either her husband has been relocated or he something far worse has happened to him. Both of these make her feel as if she has failed. She has been lacking in her duty or in her role. So she travels from her home on the east of Russia to Siberia to find him.

The meat of A Gentle Creature is the lead role, performed with clever distance and gauged emotional resonance by Vasilina Makovtseva. This underscores that rich idea of a woman stuck in a world of misogyny. Its political and potent because it stands up and challenges this. The vulnerability of a world directly seeing women as a target. Some scenes are static because you are witnessing the slow, unchanging world that is traversed by a woman literally living through it. Some scenes are very uncomfortable to watch because of this. Its incredible. It is also a very hard watch but one that feels sometimes deeply true. I feel like its the return of the New Wave idea of revealing truth to power by showing reality. 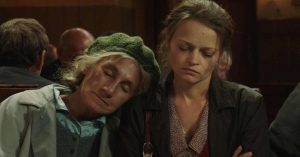