Thank you to those people from the world of…Arrow Video. They have located (with help from Frightfest no less) a slacker gem that is genuinely bizarre. It reminded me of an absurd drug hallucination I had, where I was multiple version of myself. Now that messed me up for a few months but this, this just might be the must watch film of the year. 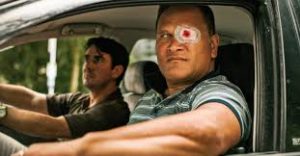 Time is a multi layered thing. One that sees you almost shot dead one minute and another running off with loot. All thanks to a Chinese pendant, stolen by Johnny (Anton Tennet). He is an idiot in truth. One that has flopped along in life. When gang leader Shelton (Jonathan Brugh from WHAT WE DO IN THE SHADOWS) wants revenge after Johnny double crossed him, that pendant and all this time travel might just save his bacon.

It might be considered an 80s throwback but I would say that MEGA TIME SQUAD, revels in balancing hallucinating visuals, sci fi genre conventions with swift comic slapstick. Washing the ideas in enough clever wit and convention to paper over the silly narrative imbalances and budgetary crashes that many indie film scripts meet. 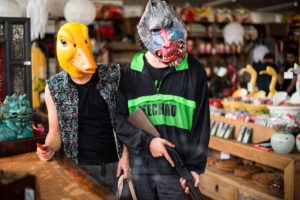 Commending the visuals and script are one thing but I have to say that by the short 80 minute, the overall thin idea truthfully does not hold up. With the lack of nuances, as well as a lack of tonal movements around the central story (the lead actor has a habit of speaking without tones). This said, as Tim van Dammen says in his commentary, is all about keeping the film going and getting it to  market. Also he was concerned about the script getting bogged down in ideas.