Song of the Sea DVD Review

The Oscars don’t often get it right but they were wrong again. In naming Disney’s fun, but relatively by the numbers 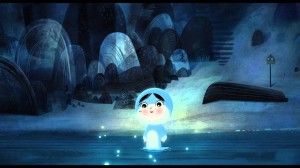 adventure, Big Hero 6 with the Best Animation award they got it wrong on a number of levels. Not only was it not the strongest of the nominees, that nod of course goes to Tomm Moore’s staggeringly beautiful and moving Song of the Sea, but the fact that they are even on the same platform belies a greater misunderstanding of the gulf of distinction between the two films.

Disney’s effort is charming without doubt, the central character Baymax has to be one of their best efforts, but Song of the Sea transcends words like charming or fun, it in fact transcends the usual parameters people bestow upon animation, as so much of the best of the medium does every year.

Tomm Moore’s film is a stunningly hand-drawn piece of art, unique and tonally lush. The wonderful autumn hues contrast to the midnight blues of the sea and the dusky greys of the city. Each setting gives Moore and his animation team a chance to imagine a new world from scratch and every one of them is a delight. 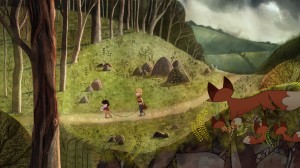 While there is no doubt an influence from the revered Japanese animation house Studio Ghibli, there is a distinctly Celtic charm to Moore’s work. As Miyazaki and Takahata’s stories often exist in Japanese folklore, so Moore’s draw upon Irish sources. Song of the Sea tells the story of a young girl, Saoirse (Lucy O’Connell), who can transform into a seal, and her brother Ben (David Rawle) as they go on an adventure to free the faeries of the spirit world.

To do this Saoirse must “sing her song”, something altogether more difficult for the young girl who has been mute since the disappearance of her mother, immediately after her birth. There is a childlike glee here that masks far more sombre subjects. Ben and Saoirse encounter bizarre and comical characters on their journey, escaping from their grandmothers in the city to head back to the tiny island where their father lives but underneath lies a darker story.

The traumatic nature of Saoirse’s birth has caused the relationship between Ben and Saoirse to be troubled as the older brother struggles to accept his sister, associating her with the loss of his mother. Their father, Conor (Brendan 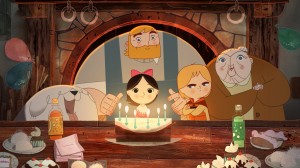 Gleeson), struggles. Depression and isolation have dominated his life since the loss of his partner Bronach (Lisa Hannigan). His mother (Fionnula Flanagan) takes the children to the city after worrying he can no longer take care of them, but her attempts are perhaps misguided.

At the heart of Song of the Sea is a caring family dynamic. The film shows us how the suffering of the ones we love is our deepest sorrow, but the message is an upbeat one, family and friendship can conquer our darkest of hours.