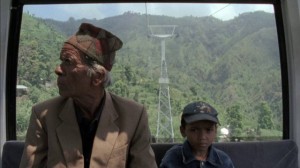 Manakamana has been described as the Sensory Ethnography Laboratory’s version of Andy Warhol’s Screen Tests, wherein he filmed several minute long unbroken takes of anyone he thought of interest, but fortunately that description proves reductive.  Made of eleven takes, each eleven minutes in length, each captured with a stationary 16mm camera facing travellers in a cable car as they travel to the titular temple, the formal rigour of Stephanie Spray and Pacho Velez’s film does immediately bring to mind the structural approach to filmmaking that emerged in the late 1960s. Filmmakers such as Hollis Frampton, Michael Snow and indeed Andy Warhol sought control over the shape and form of film, often reducing it to its most bare function to reveal the value therein, and in their minimalist cable conceit, Spray and Velez seek in some ways to do the same. Yet, whilst Manakamana shares the discipline of the films, it also conveys an ardent humanism that those films purposefully avoided. Spray and Velez somehow manage to take what is alluring about the structural films, the discipline and rigidity, the demand and promise; and combine it with the reward offered through engagement with a human subject, creating something new feeling in the process – a sort of ‘structural ethnography.’

The film’s concept arrives through a wonderful coincidence. The duration of a roll of the film used in Spray/Velez’s camera (which they have said happens to be the same one used by legendary ethnographer Robert Gardner for his film Forest of Bliss – in case they should be accused of hiding their influences) lasts 11 minutes, which turns out to be the same length as a single ride on the Manakamana cable car, either up or down. The 11/11 format is not entirely new – James Benning’s 10 Skies has ten lots of ten minute long shots of cloudy skies, each playing out in their real time, dramatic uneventfulness, recorded for the viewer to observe – but Spray/Velez are lucky enough that their conceit adds emotional integrity to their project as well as formal rigour. More than a structural convenience, this conceit provides a formal rhythm, one journey rolling hypnotically into the next and one Manakamana pilgrim passing the torch to another. That it is a transition made terrifically smooth by a fade in and out in the darkness of the boarding platform arrived at the end of each ride only helps.

Containing both character study and landscape film in the same frame, (the mountainous greenery sitting as beautiful background to the human foreground) Manakamana seems to be getting the best of both worlds. Once settled, the viewer is a constant struggle about which to indulge their gaze with – the luscious, sliding green background of the Peruvian hills rising behind; or the human activity of the foreground. Each 11 minute ride offers a different set of companions, in turn: three babbling peruvian women, a more contemplative older man and his grandson, three metal band members, two tourists and a tribe of goats, amongst others, and each offers its own unique visual pleasures. Manakamana is a film about looking, or more specifically about resting upon and studying the human face.

The aforementioned James Benning, whose films are a clear influence, famously taught a class at the California Institute of Arts called ‘Looking and Listening’ where he would take students to a location and force them to stay in place for a protracted period, making sure that they really looked. Manakamana is not as extreme as Benning’s class, or even his films, but it does emphasise the value of looking at things, and more humanistically perhaps, of looking at people. Through the 11 minutes, the invitation is there to look, analyse and hopefully, emphasise. One incredible lady near the end of the film has a face that seems to go through the entire spectrum of human emotion in a single minute. Rich is the human expression when time is devoted so entirely to it. Of the aim of his class, Benning has said that ‘we find looking and listening to a political act, our differences in perception reflecting our individual prejudices.’ It is not clear whether Spray/Valez intend anything as deep as this by forcing us to look carefully at humans and landscape alike, but the effect is clear. Held captive with each distinct set of characters, and in silence for almost the first twenty five minutes, we are forced inwards, invited to inspect and introspect, and construct narratives about them (and ourselves) from the faces in front of us.

As seen with the success of last year’s Leviathan, the band of filmmakers that make up Harvard’s Sensory Ethnography lab have found a way of bringing interest to the most specialist of subjects, whether sheep-rearing, ‘dragger’ boat fishing, or cable-car riding. Whilst all fundamentally experiential, no two projects within the Lab are the same. Leviathan was about immersion and transportation, hurling its viewers unforgivingly into an unknown watery abyss and thrashing them about until they understood it, but Manakamana is less forceful. It is still documentary as spectacle, but in a lower key. Manakamana is the life-sport of ‘people watching’ put on screen, the infinite pleasure of looking at strangers and coming up with stories and histories and ideologies for them as they pass. The difference with this cinematic version is that the screen acts as a barrier and the viewer is free to indulge in the game of staring without fear of the gaze being returned. In life, when the object of your fascination looks back its polite to turn away, when this happens in their film Spray and Velez invite you to stare deeper.