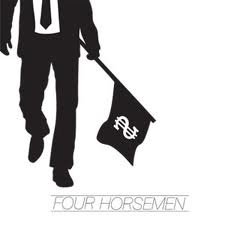 Amid all the discussion and furore about the current economic crisis there are a few clear voices. Amongst the allocation of blame, the political one-liners and the prescriptions to return the economy to its previous equilibrium there are some determined to find the root cause of the crisis and cut it out. In Four Horsemen Ross and Megan Ashcroft assemble some of the world experts who are marginalised in the corporation funded media, giving them a platform to assess the crisis and its fundamental causes while prescribing what needs to be done to solve the problem. It may seem unrealistically lofty to declare this film as one of the most important documentaries ever made but it truly is. The film delves deep into the history and sociology of our culture and its ties to consumerism and lays bare the problems that blight it in an excellently constructed and sumptuously detailed exposé.

The film is split neatly into four chapters (Empires, Banking, Terrorism and Resources) with a final segment discussing the meaning of progress and if the economy we currently inhabit has progressed. This structured discussion of topics gives the film an easily digestible movement. It flows seamlessly between the chapters at very logical junctures, allowing the information to sink in for even the layman. Ashcroft and his narrator Dominic Frisby dissect complex economic structures, breaking them down to simple facts and figures without skewing their meaning.

The graphics produced by Pola Gruzska are an integral part of the simplicity of the films argument. Her animations are streamlined and clear giving Frisby’s convincing narration a concise framework. The graphics slide in from the edges in black and white, simple graphs and charts which are easy to understand without being condescending. Much of the success of the film lies in the faultless movement between the on screen experts and these animations.

There is immediacy to the flow of the film. Though not rushed it accelerates through the material lending it the air of high importance. 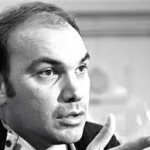 You must have this information or you will die! Each contributor sits in front of a black background when delivering their short monologues fuelling the idea that this is a life or death situation, no time for any colour around the edges. The commanding voice of Frisby gives the film an authoritative feel akin to the revered BBC documentaries but with more force.

The film is very sympathetic to the cause against the financial markets domination of the world economy, but it knows this. After the introduction Frisby notes that the film’s subject appears sympathetic but instead of diving into the already jam-packed pool of blame this film has another agenda. It has been created to open the eyes of anyone who views it. The staggering reality is that while news and chat shows seek retribution for the people responsible for the crisis there are never any alternatives presented. Four Horsemen is the alternative. Mapping out the problems before discussing exactly how they can be different. Far from propaganda the film’s well written script and wisely chosen experts such as Noam Chomsky, Joseph Stiglitz and Tarek El Diwany provide an air of authority when prescribing changes to the economic system. Diwany as a former trader has particular credence when criticising his former colleague’s activities.

The DVD comes with a small amount of extras. A few comedy videos poking fun at capitalists and Wall Street traders with the pick ofthe bunch being an animation of a billionaire superhero giving advice on how to take over a country legally. There is also a short making of feature that introduces the small team who made the film and discusses the production choices they made putting it all together.

Four Horsemen is looking to enlighten the public, to help open the eyes of those who are blinded by neoclassical capitalism to the other options that are available. There is a message of hope within, but the public must want to see it. The main obstacle this film must overcome is people’s reluctance to accept that the content is the truth, their lives could be about more the than greed and consumption of the modern world. This film is socialist but only in the terms that it believes that what people really want is the company of other people, not the manufactured world of ‘things’ that we live in, you can’t take any of it with you. The film may get hidden by the mainstream media whose interest lies in this story not being told or accepted but those who see it will find themselves lifted. It is time for self education, and Four Horsemen is just the place to start.