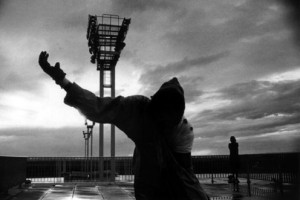 Visually striking and inspired, both these works from Chris Marker are a must see for anyone serious about cinema.

La Jetee is no doubt one of the most influential movies ever made yet only has a running time of 28 minutes. The inspiration for Gilliam’s 12 Monkeys, it tells the story of a man forced to travel in time to help post WWIII civilization survive. Made up entirely of photographic stills, it is both a bleak and compelling piece of Science Fiction which has certainly stood the test of time.

Another brilliant piece of Marker’s work is Sans Soleil, a documentary essay which challenges the conventions of how actuality should be represented. Full of poignant images, the film looks at different parts of the world raising various questions as a woman narrates the musings of a fictional traveller. Everywhere from Japan to New Guinea are studied as Marker examines the diverse customs and cultures. Particularly striking is his examination of Japanese pop culture which is just as relevant now as it was then. Despite being difficult to get into, both films are rewarding experiences and challenge how one perceives the cinematic form making them essential viewing.