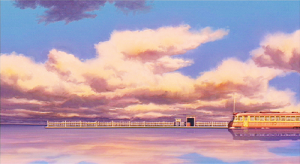 For many people in the UK and US, Hayao Miyazaki‘s Spirited Away was the first time they experienced the joy of Studio Ghibli. The critical attention, wide release and a cabinet full of awards (including the Pixar dominated Best Animation Oscar) meant that the Western world began to wake up to wonder that is the house that Totoro built. Meanwhile, the dedicated fans who already loved Kiki and Nausicaa were left saying ‘SEE! We told you so.’ The release of this masterpiece on Blu Ray – ahead of a boxset of the complete Miyazaki – is the perfect chance for those of you yet to go down this rabbit hole to make that first step. A whole new world awaits the intrepid viewer, and the story of Chihiro may just be your way in.

Yet, really, Spirited Away is not the most accessible Miyazaki film at all, and one glance at the plot might give away as much. Chihiro is on her way to a new town, reluctantly being dragged there by her parents. They get sidetracked into a ghost town, the parents turn into pigs, Chihiro gets trapped working in a bathhouse for local spirits, loses her name, befriends a dragon, frees a slime spirit, takes a train ride. It’s a baffling, broad world where nothing is quite the right shape and where the grotesque sits happily alongside the beautiful. The giant baby and jumping heads may be enough to turn off the casual viewer, but for those willing to invest in its weirdness, the appeal of Spirited Away becomes evident.

Miyazaki is a master of creating unforgettable images. The bus stop scene in Totoro has become iconic, but the Ponyo running across waves with faces, Nausicaa exploring a toxic forest, and Howl’s castle appearing for the first time are all images that sum up the magic of Miyazaki – he shows us things we could never dare to imagine ourselves, revealing the world in a new way and dazzling us with his imagination. Spirited Away is full of such images – when Chihiro first sees the spirit world for what it truly is, and creatures of all shapes and sizes emerge around her, you are instantly carried to a wholly new world that is both scary and exciting. Such is the invention and skill of Miyazaki that you don’t just watch Chihiro, you go on the journey with her.

The greatest scene, and the one that is most universally praised, is a simple train ride as the plucky heroine travels along a submerged railway with a spirit, a baby-turned-hamster and a tiny bird. When seen as a coming-of-age tale, this is the moment in Spirited Away where that actually happens. Chihiro is reluctant to move house, to leave her old life behind, but her journey into the spirit world teaches her responsibility, quick thinking and to generally just get a better attitude. At the start she is whiny and self-absorbed, yet over the course of the film she learns sacrificial love, kindness, diligence and even a small environmental lesson with a tricky river spirit. When sat on this train you realise what she has become, the strangeness of the image centred around her calm, confident figure. It is also, like the rest of the film, exquisitely animated and framed with a far better eye than the majority of live-action directors. It’s unforgettably beautiful.

So it’s best not to think about the plot in Spirited Away. Instead, approach it as a Japanese version of Alice in Wonderland, which is more of a series of bizarre events that transport you to a wholly new world. And nobody builds worlds quite like Miyazaki does, so get ready to take the trip.