A historical epic that is historically unbalanced but deserves better and richer evaluation then a Guardian piece gave it credit for. Muhammad Ahmad (Sir Laurence Olivier) has labelled himself the Mehdi and sets forth an army to reclaim Sudan. When Egypt fails to stop him militarily, it is tasked to Gen Charles George Gordon (Charlton Heston) to defeat the Mehdi.

Basil Dearden (Victim,  The League of Gentlemen) directed an epic!!?!? Yes I guess that is your first response to this film. Well he was a long way down the list. The film is very anti colonial, however that is in its tones and in-flex’s. In today’s self serving, critical industry, some have taken it that this is pro colonial and pro Imperialist. It is not either. This is forcefully suggested by Gladstone (played with vim by Sir Ralph Richardson).

It does expose the British skill of double faced duplicity however. Also said critics say this film is racist. Nope. Sir Laurence Olivier plays an Arab warrior (David Lean had Alec Guinness) but it is because of funding and billing. Nothing more than that. It is not a good film by any stretch however. 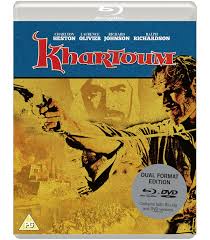 The 1080 presentation has kept the film stock colour nicely (it was lost on the DVD). Sheldon Hall exclusive video interview is excellent. This is the best of three very good extras. Its informed, he is an interesting listen as he also knows his film and colonial war history. The Audio Commentary with Film Historians Lem Dobbs, Julie Kirgo, and Nick Redman is very good as well. It runs through the film and drops in notes on events of the film and actual history. Then the new essay by Phil Hoad is excellent. This is more on Heston and his Epic phases…