Witness for the Prosecution Blu Ray 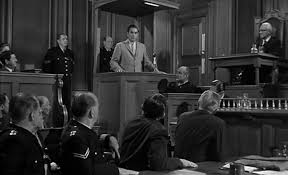 If Billy Wilder and Agatha Christie had a baby, what would that baby be like? It would be reflective of their concerns, preoccupied with themes like duplicity and deceit and most likely a tangles mess of emotional chicanery. WITNESS FOR THE PROSECUTION is that baby and it has much of these traits permeating its surface. Tyrone Power is Leonard Vole. Accused of murdering Mrs Emily French (Norma Varden), a rich widow who has taken a shine to him. Sir Wilfrid Robarts (Charles Laughton), has agreed to take the case on. However he is unwell and has been ordered to rest by his doctor, who has underlined this by saying ‘no murder cases’. To muddy everything along comes the alibi for Vole. His German wife Christine (Marlene Dietrich) was with him but she seems to be unpleasant and disliked by all. As the trial opens at the Old Bailey, the truth begins to come to the surface….

Exceptional. Extraordinary. Powerful. Lots of adjectives. A lot of them are relevant but I can only add that yes, WITNESS FOR THE PROSECUTION has a reward in watching that few films have attained. Bold claim but let me back it up with something that will add weight. As a work which originated from a literature genius, you know what it will provide. A clever suspense thriller, working on the tension of what happens at its conclusion. Wilder effectively translates the piece with sardonic humour and suspense living as close bed fellows. This is his contribution and a wonderfully relevant one at the time and for the range of the audience. It is this that still allows us to watch it today, without scoffing at it….

The extras. Well the 1080p is a step up from the DVD. That was cleaned up from its source (to be fair I liked it but those blacks were not deep or rich.) This is shining with a texture that makes for a rich watch. The commentary by Kat Ellinger proves three things. One, Kat is an engaging voice who delves into a subject. Two, Kat understands the value of what is on and off screen and three, Witness the prosecution is better for listening to the piece. Now some will read this and ask me why! Well Kat outlines Christie, Wilder and the work in context to its original place and time. As well as what Wilder thought of the film and the work.