The streets of Paris are awash with gaming prostitiutes, according to IRMA LA DOUCHE. However that is being facetious in the maximum to send out a summation of this film like that. Billy Wilder comedies often took on the idiosyncrasies of modern life, gender norms and social conventions. From SOME LIKE IT HOT (a criminally over sold film) and THE APARTMENT (criminally underseen). Within IRMA LA DOUCHE, we have popular Parisian prostitute Irma (MacLaine) and a straight as a line police officer Nestor (Lemmon). He has just be unceremoniously dumped from the force after doing his job a little too well. Now he wants to resolve the issue of Irma, the prostitiute populair and his own respect in the policing community.

IRMA LA DOUCHE is Billy Wilder and I.A.L Diamond (his regular screenwriter) on top form. Adapted from a ropey musical that defined bawdy humour, it was also regional and slighty bland. However with the eyes of two great human examiners on the case, it becomes much more. They extract the clever wit of sexual politics (men and control of women via parternal powers etc), corruption and mischief. This on the outside would be enough to create a mediocre 90s American sex comedy but the nuances are key to its longevity. Which means they elevate the idea above a single concept, playful humour or raunchy chuckles. Reaching the height of comedic gold by keeping the human in the humour, warts (genitial of course) and all. Comedy is truth, packaged as satire and told without reserve. That defines IRMA LA DOUCHE. 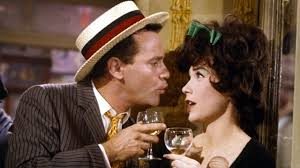 4K has dealt a big blow to the DVD standard definition world. Here though I am less impressed with the result. The DVD was quite good in clarity (nice stock print) and it projected well. Here it has stood above the original DVD release but still has colour issues, wear on the film and an occasional weakness in the richness of the transfer.

Kat Ellinger and Neil Sinyard commentary are very good. Both are all around the place. Both look at the film from varied angles. Ellinger is more film as a portion of Wilders work, its French origins, the bawdy nature of satire, sexual politics and the re teaming of Lemmon and MacLaine. Sinyard is more the musical as Hollywood event, the films making and the little bits of film facts that the film generates. Joseph McBride commentary is top of the pile. 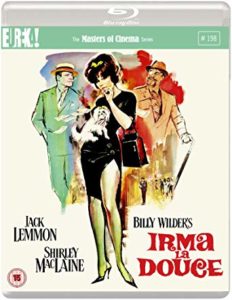