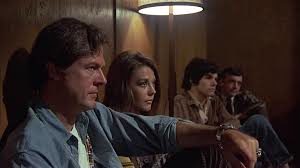 The swinging sixties were far more then sexually liberated, cultural explortive, modern self working scheme world which was often also deeply drug infused. In Paul Mazursky BOB AND CAROL AND TED AND ALICE, it is taken to task and sent up to the hilt. Bob (Robert culp) and Carol (Natalie Wood) have found themselves in a personal development camp. A new age space to challenge social norms and societal conventions. Sex is pleasure. Monogamy is for losers. The couples best friends Ted (Elliott Gould) and Alice (Dylan Cannon) are less than impressed. When Bob comes back from San Fransico after expressing physical love with another, he is open and honest with Carol. They tell Ted and Alice but this doesnt go as expected. Alice is unsure about the openness of the statement…and the relationship. So when another offer omes up, this will challenge all sides… 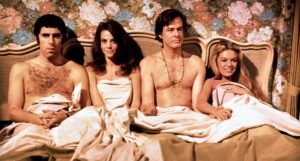 If you didnt get it, well you should know that this is a satire. One of the highest order. One that Paul Mazursky was nominated for an oscar for Best Original Screenplay. The satire swipes at the time sexual mores, personal flaws and human draws rich at teh time of self development and awareness. Mazursky pokes at the ideas of the 60s philosphical commune, social barriers and the deconstruction of the America of the 50s. What elevates BOB AND CAROL AND TED AND ALICE above the average is that it is played straight with an eye to human flaws. Truth is bitter. Lies (small and smaller) are often social currency. Identity and expectation are part and parcel of everyday life. 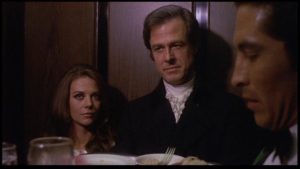 Interestingly where the film really comes into its own is not in its discussion on sex. More it is when we are seeing paternalism raise its head. This is handled in a way that explores the maleness of that transaction. By this I mean, men are different about control then women. Director Mazursky captures one very telling scene involving a return to the house and the discovery of a lover within, cleverly. He allows the domination of the scenes by one character. As he moves through the control issues writ large in paternalism (male dominance, female deference etc), it becomes clear he wants a safe rebellion. This underscores much of the success and failure of modern #metoo and feminism. 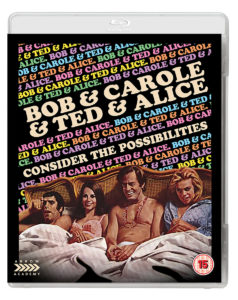 The restoration has a colour issue. There I said it. A warm tone that isnt bad. It only has that rich light which will satisfy some and maybe irk others. I really liked it. Compare it to the god awful DVD to see why…

Audio commentary featuring all stars and director. For me it is funny,  is the best thing here for the little event logs and the ideas which cast and director developed off the page. From funny incidents on plane sets, to that great scene in the lovers midst! David Cairns essay is the second best thing here. David Cairns has a way with extrapolating film as historical and culture record.