No Way Out Blu Ray review 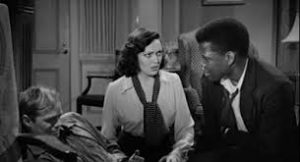 Sidney Poitier’s first starring role in a film is a this flammable piece. Its labelled as a film noir but that’s like calling cricket a team sport. This is a social commentary piece that seems indebted to films like Gentlemens Agreement. Fusing the world of post war America and the beginning of social mobility for people of colour (albeit with conditions and consternation.) Dr. Luther Brooks (Sidney Poitier) has just qualified as a doctor of medicine. 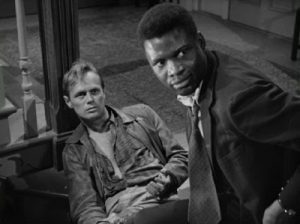 He is young, intelligent and African-American. He is in 1950’s America.  On his first night at the coal face he has to treat Johnny (Dick Paxton) and Ray Biddle (Richard Widmark). Brothers who were both shot. Both racist. Johnny begins to fade and it is believed he has a brain tumour. Luther administers a spinal tap but Johnny dies. Ray is incensed and his hate spirals into violence and vengeance against Luther and many others. 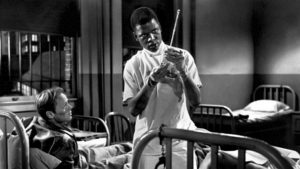 Keenly eyeing the movement for change in post war America, their was a Hollywood troupe evolving. No Way Out does its best to play on the under currents which seeped out of wider society. Poitier steams the screen with his bonds of rage. He also seethes with expectation and cohesion for his fellow professionals. Then at a time when America was evolving, he seems to be the voice of a new consciousness. Social rights were progressing, just a few years away from the challenge to racial bigotry and it seems Poitier is the figurehead of this. 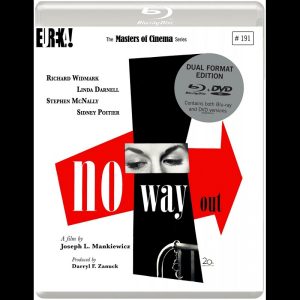 – 1080p presentation of the film on Blu-ray, with a progressive encode on the DVD

All About Mankiewicz (103 mins) a two part documentary on the legendary director, originally broadcast on French television in 1983