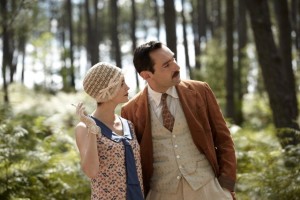 Claude Miller’s final film, Therese Desqueyroux, is a carefully shot and delicately told story based upon the 1927 novel by François Mauriac. The film follows Therese, played by the hauntingly powerful Audrey Tautou, who marries her rich neighbour, Bernard Desqueyroux (Gilles Lellouche) to bring together their two mighty estates. Bernard’s sister, Anne (the beautiful Anaïs Demoustier) is Therese’s best friend as the two girls are growing up and they grow extremely close. There is a sense of tenderness and love between the girls, that Therese feels with no one else. When it is suggested that Bernard should marry Therese, there appears to be no other choice and at first Therese is interested in this free spirited young man but once they are actually married, she begins to feels closed in and isolated from the intellectual world that she felt she was destined to be part off.

She spends her days dreaming of Paris, of literature and art but when she finds herself surrounded by the walls of her home all day, things start to break in her head. Whilst the couples early days are littered in self discovery, Anne becomes close to the young, Jean Azevedo (the handsome Stanley Weber), who is believed to have come from a Jewish family that are riddled with TB. No one really knows much about the man or the family that he comes from but they see him on his sail boat out at sea and that is enough to make them uncomfortable about him. When Anne starts to fall in love with Jean and tells her best friend that one day she believes they will marry, her family have something to say about it and carefully work together to break the couple up. For the first time in Anne’s life, she starts to feel and understand independence, she starts to discover her sexuality and most importantly, she starts to develop emotions for someone else. At first she thinks that Therese will understand her and appreciate what it feels like to fall in love but when Therese plays the role, she believes she should play, following the families wishes and it hurts the friendship forever.

What follows is a series of stunning sequences, where Therese grows closer with Jean as he represents everything she wants for herself. It is

during these meetings and their letters, that she realises the mistake she has made marrying Bernard. She is expected to become part of the family and ultimately lose her identity. When she learns that Jean reads books that she has never heard of and contemplates about philosophy, she grows angry and bitter towards Bernard and his family. When Bernard develops a heart condition, the doctor tells him that he must put arsenic into his drink each day to calm his heart, but to be careful and not to overdose because that could kill him. When he accidentally poisons himself one day and Therese does nothing to stop him, she quickly calculates a plan. What she doesn’t consider is what would happen in Bernard continued to live, what a disgrace she would become to her own family, Bernard’s and to the world around them.

Miller’s direction is so subtle that Therese Desqueyroux may not be for everyone; he carefully carves out characters who are each unique in their own ways. Each actor fills their characters with such delicate nuances that the film feels so wonderfully traditional. Visually, the screen is filled with such stark colour and so many beautiful images that the audience become greedy for more. Whilst at first the story does seem to jump around quite a lot, especially over time, once the story settles and we spend more time with Therese and start to really understand her malady, the audience are completely pulled in and asked to sympathise with a women who has no where else to turn to. 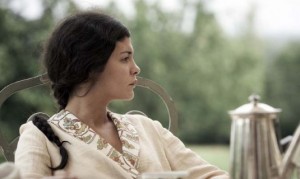 Tautou is possibly at her greatest when she is looking away from the audience; she plays Therese with such power that even during her weak moments you think she has something brewing beneath. That is possibly the most important thing about her throughout the entire film; she is sad and angry against everyone around her and yet she always manages to keep that just bubbling at the surface. Whilst many actresses would find it hard to get the balance between overdoing it and not putting her emotions across whatsoever, Tautou is simply brilliant at managing to portray a women who is broken and bitter without becoming melodramatic. This is possibly the most beautiful, daring and stunning role that Tautou has played throughout her career – especially as she plays someone so real, someone that so many people can relate to.

Whilst the rest of the cast are just as fascinating, Miller really does manage to create something very special in his final film. Lellouche plays Bernard so that the audience are never sure whether to hate him or just feel sorry for him; it is clear from the start that what he lacks in cultural intellect he makes up in street smarts but we know that would never be enough for Therese. Another credit to the film and the cast is this careful bubbling between a man who could bring his wife down to the ground and allow her enough breathing space to fund her own decline. He is calculating and ruthless and yet there is never a moment when he causes the audience to hate him.

What the film fails to do narratively, it makes up thematically. Whilst there is never a moment when you think Therese is going to break free 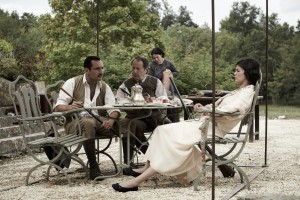 and start the suffragette movement, Miller’s filmmaking causes the audience to want to continue watching her suffer. It is once she starts playing a very dangerous game of trying to kill her husband that the audience’s heart starts to race and you wonder whether she is going to get away with it. Once the authorities work out what is going on with the couple, the final chapter tells a sad story about a woman locked away. The ultimate irony is that whilst she wanted to be free of her husband, she never realised that she would lose all her freedom. It isn’t until the last moments of the film that Therese really gets what she wants, but even then, you still sense a little yearning for the man to come and look after her.

Therese Desqueyroux is a real ode to what beautiful French cinema can offer; when the story is heartfelt, the cast are simply divine and the cinematography is lush and opulent, it all comes together in a slightly perfect package.