Australian cinema grew in international reputation in the 1970s. The main reason was that tax breaks in Oz allowed for film producers to grab hold of the financial benefits. Ozploitation was born. Many films were awful, some were passable and a select few were amazing.  So HARLEQUIN is actually one of those surprising releases that is both brilliant and awesome as well.

HARLEQUIN sees Nick Rast (David Hemmings) pushed into the political limelight. However his young son is terminally ill and this could force him to pull out. Then a mysterious healer called Gregory Wolfe (Robert Powell) appears. He cures the son and seduces Rast’s wife but the powerful interests behind Rast’s, in particular Doc Wheelan (Broderick Crawford) are less then happy. 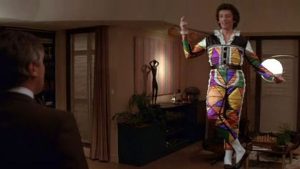 Coming to Ozploitation with an open mind and a casual lilt is often the only way to start. HARLEQUIN needs neither my casual acceptance or open mind. It is outstanding. Powell is perfectly cast as an aloof, ethereal oddball. He over blows the role but it needs this, to extract its oddity. Hemmings as the senator Rast is also the balance. He adds the rabbit in the headlights to those in Powells Wolfe glare. Political, potent, often playful with expectations, HARLEQUIN is a staggering piece of Australian cinema, given a new home and outlook. 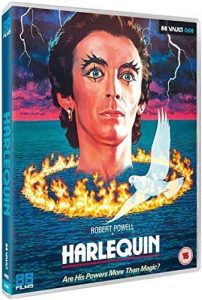 I will not speak of the O card (which I love.) The booklet featuring Waddell essay notes adds details which I think fans who know the film will appreciate. The interviews are hit and miss. The commentary is all round excellent. Antony I. Ginnane is really worth listening to. A one man movie empire. The really great extra is Newman interview. His love of film flows like a river.