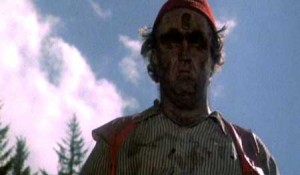 Five teenagers cant help but head off in to the woods for a little bit of fun and adventure. One of them has just come into ownership of this green utopia. He wants to see what his old dad has given to him. Sadly what it appears to be is a collection of trees, a waterfall and a ranger. The ranger warns that its best not to stay around long here. They woods aren’t for nice folk or for anyone that might like to broaden their gene pool. They don’t take heed and when a very unhappy looking man with a machete turns up…. we know they should have… 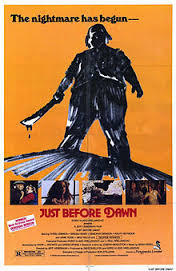 The place to start with a film, series and label that has released JUST BEFORE DAWN is with the director. Jeff Lieberman made SQUIRM. A horror film that exploded body horror and the then popular nature vs person genre. That film was became a hit on late night cinema and TV circuits.  Lieberman seemed to fall after this film and ended up writing films like THE NEVER ENDING STORY 3. However here we have a film maker that is breaking into a genre that was swamped by this point with massive low and big budget films either in the pipeline or on release. The genre became the go to model for so many because it was popular, cheap and was breaking and resetting the taboos of the age. Sex for instance is a major part of this, as is random violence. SQUIRM was released recently by another label and in my opinion is a weaker and less formed film than JUST BEFORE DAWN. The latter film is better made, clever in its use of tension and has a score that is outstanding. 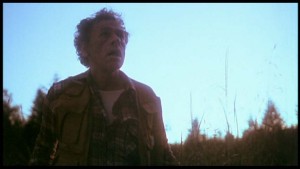 My meaning behind better made is simple to explain. In the way the camera creates in the film space and human interaction. Sounds pretentious but think of it as the camera telling the story to us with skill and making it interesting. More so than a lot of slashers. Then you have the actors that people the main roles and the external performers aside from that. Yes you have very recognised faces here but you also have them acting and not just fodder for a knife or what not. They are at least trying in my mind to give us a little meat. Also a little subversive humour. 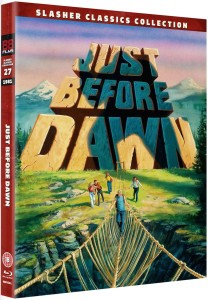 The use of tension in the film is amazing. It unfolds with a skill that breaks past the films indie roots. Uses the superb soundtrack to reinforce that tension and sometimes unfolds to subvert the genre troupes. It makes for a very engaged and fun ride. It also makes for a more satisfying experience.  To the series and label. Well the series (Slasher Classics Collection) if you have followed my work on it, has given us some treats. This for me is the highest of those. It is a little known film in the mainstream but one that is a worthy addition. This also starts to underline that the label, 88 films are on the rise. Some have been unsure as to the direction of the brand. I however have often said ‘they are always different and that is good’. Yes they are always different and their releases are sometimes left field or ropey titles but they are done well and with a feel for the end user. A rare treat in my eyes and this means that they are on par with the other labels…

To the disc. Well JBD looks great and the HD has cleaned the print up a lot. There is still some print damage and to a few fans of the film that will jar. Sorry guys but even as a perfectionist, you have to accept its what it is. The commentary givens detail, context and above all reward to re watching the film. The extended cut did little for me. Some felt that 88 films gave no added extras but here they are swimming in them. The best is the doc on the grindhouse days…