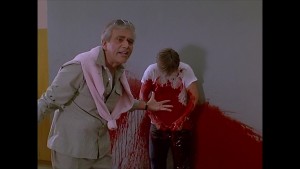 After the horror at the high school which saw the death of a bunch of students at the hands of a serial slasher killer. The popularity of the events has made many people want to know more and as such its a lucrative ground. Lucrative for those prepared to tell the story and maybe even exploit a little bit of what happened to make it more sleazy. So a film director and producer team set out to make the film. The film about the horrors however at a high school becomes the ground for more murders. 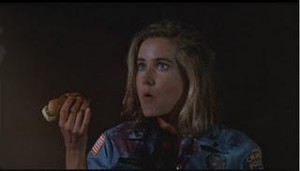 Parody and satire were riff in the US film industry of the period with genre films. 88 films have already released the brilliant Cannibal Woman in the avocado jungle of death, a favourite of critic Mark Kermode and a great feminist satire. Also Revenge of the killer tomatoes (both share the link with Clooney) which is a satire of the horror troupes of the time. An absurdist take on the subject can sometimes really open up things we all identify with, within these films and also within these genres. 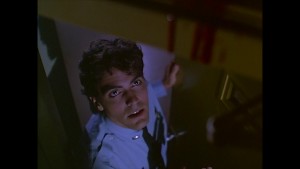 Horror High is a little away from that in reality. It is a little like a less well observed analysis of the genre with it trying to be still serious. Now it is a send up comedy that was copied for SCREAM 2. Take it from me that is front and centre here, however it occasionally losses the thrust. This makes it blur a little and that becomes jarring to the complex nature of the genre. The horror becomes abstract and throw away. The jokes become a little hard and a lot less funny. I was noticing the slant of the film becoming confused and inconsistent. 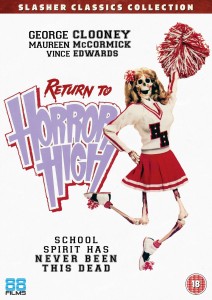 The HD widescreen transfer looks a dang sight better than I would have expected. It is clean and crisp but I will add the soundtrack is a little quiet in the stereo choice. The commentary adds a lot to what I said above, it looks at the funnier aspects of the films. The class dismissed is okay. Not what I would say is amazing. The booklets is very good and once again adds weight to Dr Waddell making another series on slashers and 80s cinema…