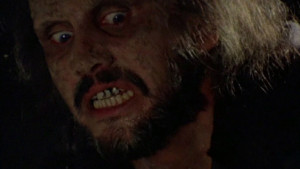 A lovely island getaway. The sort of thing that this time of year is all about. However it is far from idyllic when a group of tourists get caught in the frenzy of a crazed cannibal killer. They have sailed to the island for some well deserved rest and relaxation. He has already dealt with the locals, devouring his way to leaving the island empty. Now that they  have landed and are the next group for his appetite, he feels it is time for dessert. They however have other ideas and set about either escaping or killing him… 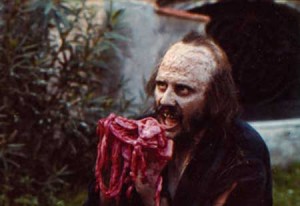 Anthropophagous is a bona fide video nasty in every sense. That is probably how you would have come into contact with this film prior to its release.  Banned due to the panic of a nation that connected human violence and social chaos as products of watching films. Absurd, yes but in the mind of the uninformed an easy link. It was also played on by political groups and religious organisations as well. The film is connected with other films from the low budget Italian video boom. Films such as Cannibal Holocaust, Zombie Flesh Eaters and even Anthropophagous sequel. 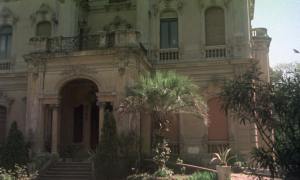 This film is a haphazard and often ridiculous affair. Joe D’Amato made some awful films and some very good films, his best being another 88 films release called Beyond The Darkness. George Eastman (interviewed for the Blu Ray) is an institution (some feel he probably should also live in one!) but he gives us his great munching, macho menace. This is something he excelled at, adding to the wonders of the disembowelment galore. This is sheer and splatter, it is also deranged and delicious in equal measure. 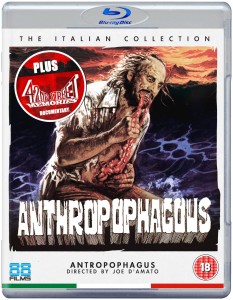 The Blu ray upscale’s the previous release by some way. The issue with exterior and interior colour has been improved and in almost every case resolved. The catacombs scene darkness is now corrected, so you get the delights of that cut scene…nice. The audio excels but feels like previous version just given a little boost. The real delights are the deleted scene and the interview. The deleted scene is a rare find. Showing some of the effects of editing and production choices. The interview with Eastman is excellent and the real reason to buy for me. He is crazy but also a little like the most interesting guy in the room by a country mile.