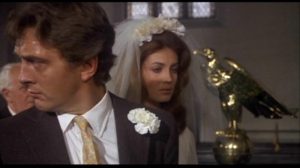 A mystery that is complex, disturbing but flats out at the end into a damp squib. Tim Brett (David Hemmings) recovering drug addict and author, has taken a holiday with his lovely Aunt Lucy. She has the vim of a woman half her age and the mind of saint. You see she is given a better life and livelihoods to criminals fresh out of jail. This holiday is to relax her and give her a much needed rest. Then when she goes off to see the sites and is found dead on a place marked x within her tour map, Tim is broken. When he tries to find out more information on the death, he is threatened to forget everything. 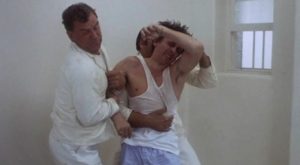 For todays film, we have the bleak unravelling of a man. That man was the powerful and potent actor and tour de force David Hemmings. He was a national institution and an international sensation. He was at once the face of horror films and also British film. He had a face and eyebrows that are in themselves gifts. He also had a temperament of a wild animal mixed with an English Gentleman. 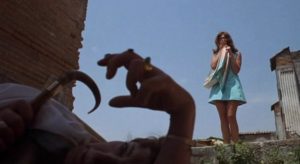 In Fragment of Fear his presence and the slow but deliberate self destructive (either manufactured by his psychosis or by external forces) essence of the piece is compelling. It is also unfulfilled in its final third. Why? Well it lacks the punch that it should deliver to craft the TKO. It wants the audience to decide or decipher the information. It fears its conviction and this explains why it is an under seen film. 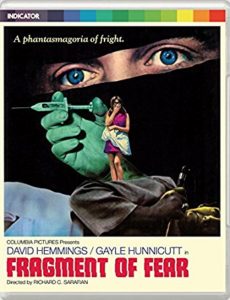 The transfer is lovely. Looking great and a step up from DVD releases. The best piece on the disc is that Dehn piece that opens up the world of a great writer. This is sublime.