Nazi scientists are trying to create something ultra evil as the end of the war closes in. As the bombs fall and the bullets fly, the evilest of the doctors flees into the ether but not before killing anyone in his way. Fly forward twenty years and the jungles of south America. Explorers looking for gold, treasure and fame come across the Nazi jungle laboratory and those set on keeping the secrets hidden within. Cue cunning escapes, shootouts, fist fights and exploding everything galore! 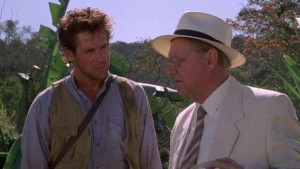 Raiders of the lost ark created a whole series of knock off films and other delights. I was only last week playing the amazingly silly Rick Dangerous computer game and then this popped up on my mat. River of Death is a grand attempt at a low budget action film. River of death has all the right sprinkles of action and B movie ingredients to work out. Exotic locales, crazed Nazi scientists (played with gusto by Robert Vaughan) absurd but well executed set pieces and ludicrous story developments (Raiders meets The boys from Brazil meets 80s action films) 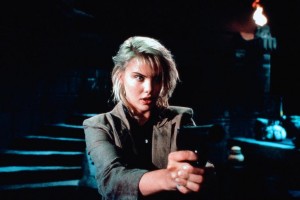 This all said it is far better than many credit it with being. It is a better film I know this is directed at a certain core audience but it actually deserves more wider exposure. I felt after the watch, it had texture and depth that is hidden by the sheer lazy labelling by some commentators of the time and now, of it being a Cannon film. Take also why I mentioned Rick Dangerous the game. That also was a great attempt at a game of a film duplicate that was far better than credit and the commentators gave it credit for. Now go and buy to decide for yourself and then let me know. 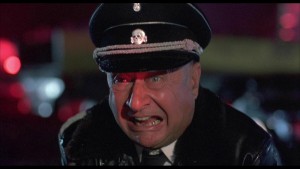 So the disc is good enough to smile over. Director interview is a little weak but makes you see how much he worked to make the thing come together. The booklet is solid in interview and information. The sleeve is a delight and the films transfer and audio is solid….