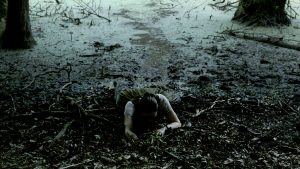 HAGAZUSSA saw success from Fantastic Fest in Texas, wide release across Germany and the acquisition by Arrow for the UK Blu Ray rights. Crafted from a student project, this is an amazing thing to achieve. Look closer and we can see some of the reasons why. It makes sense for a genre film to be popular. We have a fixed and expansive audience. The genre crosses boundaries and fear overcomes subtitles, quality and cultural expectations. But is there more?

15th century. Life is short, sharp and brutish. Albrun lives as a goat-herder. Her mother also lives with her in the snow wrapped Alps. One night men disguised in goat skins come to their cottage. They are accused of being witches. Alburn mother grows ill and a doctor and nun visit. They leave, unable to help. Alburn is left alone as her mothers physical and mental health deteriorate and horrors begin to take hold.

HAGAZUSSA certainly continues the traditions of horror currently in vogue. We need however to see it in the realm of the genre from Germany. Do not forget HAGAZUSSA is Old High German for “Witch”. The film THE WITCH certainly is the central piece to connect this film too for audiences. 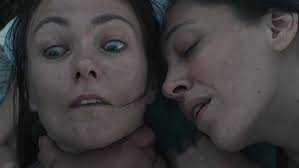 This is the advertisers and promoters tool though and is very superficial. Feigelfeld commentary suggest he is acting in the European cinema tradition of Von Trier and Haneke. Punching the audience with visceral images. These are not present in his short films. Though filtered across his work is a dark unpacking of the human mind. More apparent (and interestingly) is the supernatural and occult of past. Kat Ellinger perfectly delves into this. From the films sharing of traditions of British horror of the 50s, German silent cinema and the richness of its folklore tradition.

With Arrows set you have a copy of the wonderfully intense, stripped down and unsettling soundtrack. 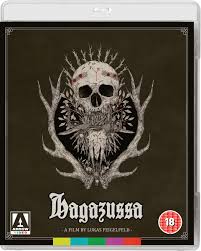