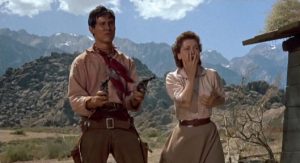 Powerhouse Films have created a stunning set (No surprises there) of westerns from low budget king Budd Boetticher and star nice guy, tough guy Randolph Scott. From THE TALL T (1957) and DECISION AT SUNDOWN (1957). To BUCHANAN RIDES ALONE (1958) and RIDE LONESOME (1959) before finishing with COMANCHE STATION (1960). Each packed with extras that often spill over into other films. 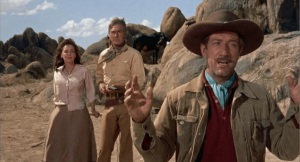 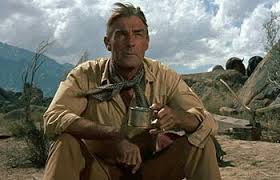 Based on Elmore Leonard’s short story, that itself subverted convention, The Tall T is exemplary. Short in time but rich in textures, sharp and sun bleached. Clever in it’s script, that is not only robust but it is also rewarding. Burt Kennedy attach’s a lot of noir notes which see anti hero become heroes. Often these scripts take characters through hazardous spaces that are reflective of all their dubious motivations. They are also ridden over a course of nasty situations, dumping us into a host of twists and turns that shock and seduce us into getting more and more engaged. 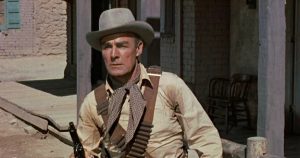 Disc : Well the transfer is a HD restoration. Colour, light and depth of field is restored. The three highs for this film are all on the disc. The top is Scorsese introduction. He is insightful and his idea of seeing across the series of films is both revolutionary and revitalising. The isolated score I really enjoyed. Basinger’s commentary uncovers, discovers and flesh’s out the cast and crew but where it comes into its own is with the tunnel shooting scene. She unpacks it delightfully.

Film : Bart Allison (Randolph Scott) wants revenge. His wife had an affair with a local boss Tate Kimbrough (John Carroll) of the town of Sundown.  She later committed suicide due to the tensions it caused. Now Allison wants revenge and on the day of Kimbrough wedding.

The move into the 60s after the post war period, saw subversive notes appear. Male insecurity, domicile indifference and the growing unease with  social expectation. In DECISION AT SUNDOWN, the sanctity of marriage is the most interesting element. With the two marriages revealing how much they counter pose each other, yet we expect them to be an alternative. 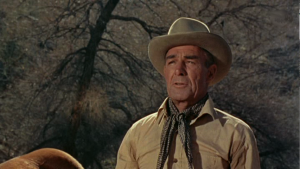 Disc : The HD looks nice enough, giving the film a tenderness. The pieces attached to the film are uniformly of interest to the film fan. However the top three are Budd Boetticher on the Ranown Cycle. He covers his own lifestory first, proving as interesting as his insights on the films. Taylor Hackford visits from not only a fan but a person who understands the films importance in terms of genre. We dont get a commentary track but we do get Edward Buscombe on Randolph Scott. Look out for Scott at the start of his career. No Saddles in sight.

Film: Tom Buchanan (Randolph Scott) rides into the border town of Agry. Several members of the Agry family dominate. After a Mexican seeking revenge on one of them, kills the youngest member, Buchanan finds himself against the whole family. 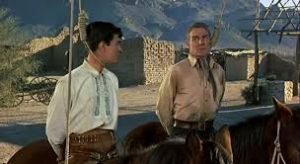 Race politics are big business in America. In this film they underpin the American psyche. That is to say, the battle which rages over where people belong and why. Fragmenting between being from somewhere are arriving somewhere else. Scott is the traveller not at home in a place but standing for the rights of people choosing to live in a town of duel roles for everyone. Its a clever device and though it often crops up in western cinema, here it is used skilfully.

Disc : HD transfer is well treated. The thing you pay for however is these three. Kim Newman on the Ranown Cycle is funny, shifts the balance to director and star but also his wish for Bud to have made more westerns is universal felt. His comments on Dances with Wolves however are less so. Christopher Frayling on Boetticher covers the range of films here but does so with a depth of genre knowledge. The John Player lecture is standout. Its occasionally rough but Boetticher is always so much value to listen to. 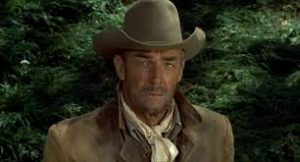 Film:James Coburn and Lee Van Cleef are names that ride along in Westerns. In Ride Lonesome Bounty hunter Ben Brigade (Randolph Scott) is arrests Billy John (James Best). His brother Frank (Lee Van Cleef) will never allow Billy to hang in Santa Cruz County, AZ. When Ben finds Sam Boone (Pernell Roberts) and his friend Whit (James Coburn) ready to help along the way, he has to stay on guard.

The best film in the set by no more than an inch. It is the films direction that excels it past the others. I am a sucker for great directed cinema and here it is exemploary in many, many ways. From its use of technique and narrative cues. If you are a film student, forget anyone who says watch the greats or the modern masters. See this and understand brilliance.

Disc : Well this is the stand alone 2K restoration. I have to say it is stunning, depth of light and dark in particular is excellent. Which brings me on to the top three. The stand out piece on any disk is here. Playing in the Open is what it is called. It looks at Boetticher use of form and is exceptional in its content. The Scorsese intro is also excellent and insightful as is the commentary by Jeremy Arnold. 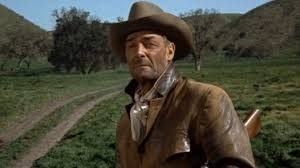 Film:Jefferson Cody (Randolph Scott) wife was captured by Comanches. He rescues another’s wife Mrs. Lowe (Nancy Gates) and sets out to return her home. Three outlaws lad by Ben Lane (Claude Akins), inform him of a $5,000 reward for her. Lowe is suspicious of Cody’s motives in coming to her rescue after this and make it almost impossible for him to return her safely. 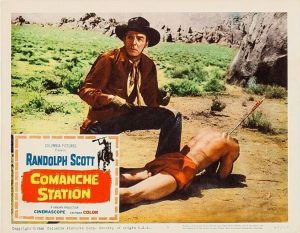 The 1960s seem to have come on the series with the force of a thousand tons. Many genre fans will understand that the shift could be felt in Ford’s work but here it is just as telling. You feel it lifting off of the films core. From the very texture in its script and cinematography. The darkness in duplicity, violence and personality is layered. We have a hero who is revenging and redeeming his own guilt. We also have a gang of outlaws with menace and manipulation. It is reflective of the first film but with utterly maleficent intent that sometimes becomes very unexpected.

Disc : Our final disc has a HD transfer that looks very good on screen. The top three extras excel past it however. Number one is Clint Eastwood on Comanche Station. Gravel in the voice but a tenderness for the director, which he understands how money matters as well as talent of creators. Taylor Hackford commentary is a little bitty (in that it is short bursts) but it walks through each scene with a film makers understanding of what is driving the story. The super 8 version is great to watch and packs the best action into a small bite…