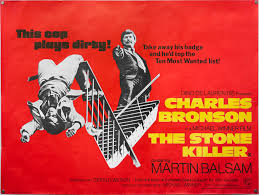 A gritty New York cop is removed from his position and sent to the sticks, for being heavy handed. He doesn’t like it but he has to live with it. Now the sticks are not the sort of place that you send a tough cop. He gets bored, he gets tougher and he starts seeing things that may or may not be there. When a prisoner and former Vietnam veteran is assassinated in broad daylight, it starts his brain ticking. The murder seems to have been set up to silence someone or something that was going on under the surface. Something that involves the mafia, syndicates and death squads. The problem is, someone is going to have to kick arse to get some answers. 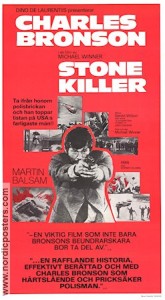 Violence in 70’s cinema was bold and reflected the anger underneath society. It was heavy handed and often steered away from being soft, being kept under wraps. The tough guy cop and enforcer in 70’s cinema was reflective of the hope of a strong presence for change wanted in society. The power of cinema at that point and not now, was to take on these social aspects of society. Take on these very wider ranging aspects that concerned many. The violence that is in The Stone Killer is hard and packs a punch. It sets up how fire is meet with fire. The rights or wrongs of it are not under discussion. The way to make things better and to settle the score is all that is discussed here. The Stone Killer like most of the Winner / Bronson films are tough fair. They are also fun, thrill rides and can be watched (once only in truth) without taking too much away from it. They are of their time and place. The Stone Killer is of a time when the Mafia was boiling over and films like the Godfather (this film borrows that films final act) were opening up questions of the negative effects of this system and its soldiers. 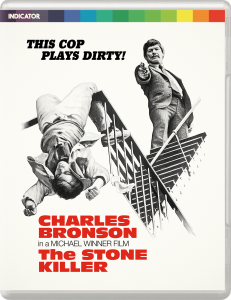 The new Hi Def Blu Ray looks good. It looks cleaner with the print looking less worn than the previous releases. It looks tonally nicer and colour corrected in those exterior scenes. The commentary is worth a listen. The commentary opens the door to the film but if I am honest sometimes this can just be words we kinda think, just mouthed by Nick Pinkerton.