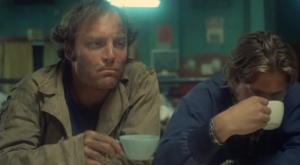 Billy Tully (Keach) is washed up and drunk most days. Living in a two bit room and living a two bit life. He once was a boxer that dazzled those who watched him…and those who fought him. Today is the day he will change everything though. He needs to get back in the ring to fight or else he will end up in the gutter. So he happens into a gym where Ernie (Bridges) is training. He sees something in Ernie and tells him to see his former trainer for a chance at a future… 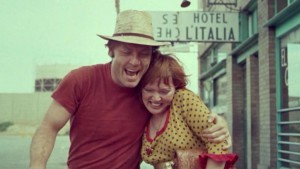 John Huston made cinema that was interesting and real. I mean look at Asphalt Jungle or Treasure of the Sierra Madre. Both films have a reality to them that is both uncomfortable and all too true. Fat City has this in spades. Even if we discard the subtle but densely packed set designs and skilled direction, we have so much to unpack and play with. It delivers heartfelt performances, wonderful bouts of boxing in halls packed with smoke and battered ramshackle lives being ran out again and again. Even if we forget the wonderful cinematography or the amazing framing. 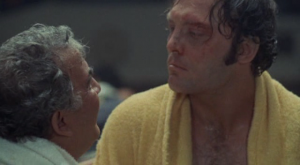 Its a testament to a film maker like Huston that you can still go to his films and find so much. Such dynamic storytelling, tenderness in performance and intertextuality is rare but he had it. He knew people and knew what it was to live and be consumed by life.

The disc is a study again in quality. 4k looks AMAZING. Utterly amazing in fact. The commentary is worth your time again and again. It is rich, shaped with fresh insight and superbly informed. The doc is good and the interview amazing in how much you get of a wonderful film personality. All in all its a must buy…