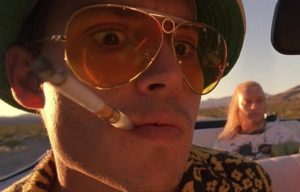 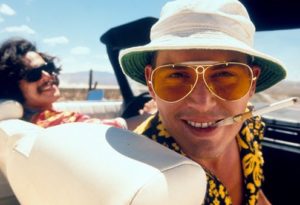 Raoul Duke and Dr. Gonzo. The Nevada desert. Duke, has sliced a mescaline dream. Giant bats have attacked and retreated. Gonzo needs cocaine to start a bum ticker. Duke has been assigned by an unnamed magazine to cover the Mint 400 motorcycle race. Arrive in Chevrolet Impala convertible. Leave and set course for dry sand with water pools. Drugs blot walking, comedic atrophy. Lizards are in bars and makeup is caked on. Gonzo is crazed and in the middle of a trip, Duke Checks into the land of nightmares. They have three days and a suitcase filled with drugs to get through. 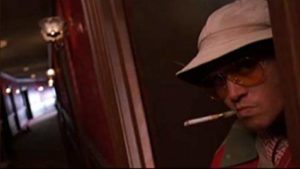 The term critical analysis is lost some what on a film like this. I being a reader of Thompson, from his crazed drug work to his masterpiece HELLS ANGELS, I have nothing but respect for anyone attempting to sculpt a narrative sense. Perversely it’s been a weekend of films with troubled productions. Now comes one to out trouble them all. Don’t listen to me though,  start in this set with Ian Christie’s appreciation. He details the trangs and bangs of the to and fro. Laila Nabulsi work is also a must visit. Fusing the idea of the film with the print inspiration. 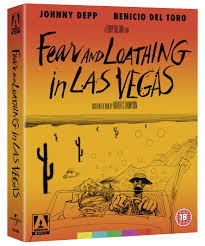 The big points to take away are the transfer and the second disc. The film has had some very good quality releases, this 4K attempt bucks the trend a little. Making the cinematography that works for the halogen lights and the desert brights, shimmering both into a toxic, nightmarish war. FOR NO GOOD REASON is a very clicked on doc. It might meander and mowkishly take on the Ralph Steadman of vanilla worlds but it is an engaging watch…

DISC ONE – FEAR AND LOATHING IN LAS VEGAS