Duncan is a rough rider and has a gang of cowboys setting out to kill and steal for gain. After massacring a native American village, he turns his sights onto a local town and its railway. This is about to deliver a safe containing money and lots of it. Navajo Joe survived the village massacre and wants revenge. He tracks Duncan and his gang to the local town. Here he saves a group of women being abused by his men but Duncan has left escaping his grasp and leaving. Duncan has signed up the support of Lynne, the town doctor, He knows how to break the lock to the safe on the train. Lynne needs Duncan to capture the train and kill all survivors. Joe discovers the plan and steals the train prior to them. He then takes the train to a safe location and sets it up a trap for Duncan. The town is less keen but what will happen next? 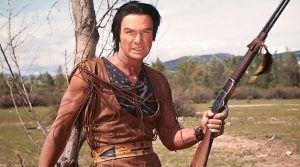 The Western began in America. In the tundra and the deserts. Not a statement that is simplistic. It reflected American dreams and desires, as well as the growing morality and power of the west evolved in the early 20th century. However it was only once revisionism appeared that in truth the darker underbelly of history was exposed. Violence and politics aside, often film avoided this discourse. Fearing the wrath of purists on the new frontiers. They didn’t want to navigate race, gender, genocide or even reality. These elements came of age in Italy and Spain. After coming to terms with the aftermath of colonialism, the Spaghetti western allowed a reflective process to begin.Often we focus on the exploitation element and miss the highly charged political meditations. Resonating with a new generation of disenfranchised youths, it exploded with the original cinematic treatment. Exposing blood, sex and nastiness. 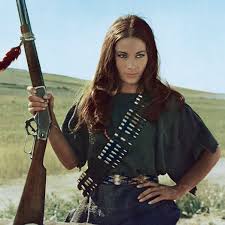 In Navajo Joe we have a picture which assaults the identity of its star Burt Reynolds (who was not a Navajo but has Cherokee ancestry). He is the avenging angel, a warrior bent on revenging the village that he has seen brutally massacred. We have seen this before with later films like Little Big Man, Ulzana’s raid and Requiescant to name but three. However what sets up Navajo Joe as a film apart is its darker edge. The race role reversal would have been shocking at the time. The sexuality of its lead and her use of it. The torture scenes are on par with other classics. The music is stunning and finds Ennio Morricone on fine form. It is a force of a film and one that is really worth seeing.

So to the disc and lets get to it!

Remastered gold in the print that has been given a softness and a hue which on a big screen, becomes like a first watch of a film in a small cinema on the coast somewhere. 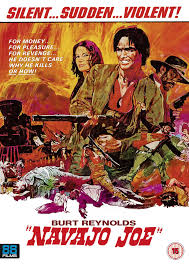 Sounds crash with a crescendo that is so powerful and potent. The extras are topped with the Eric Zaldivar piece about the genre and its resonance. Its all in all a worthy piece of film and disc in a bundle.