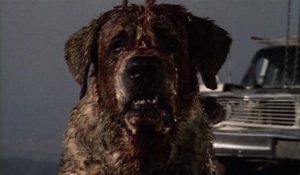 They say never work with children or animals in the film industry, I would happen that it should be never let the two work together. Dogs are man’s best friend. Children are annoying, small humans. So said no one after watching the nerve shredding assault on the senses that is CUJO. An assault happened by a dog on a sweet and innocent little boy. A mostly page for page translation of a Stephen King property. Its legend lived in infamy for many a year. Now some 35 years after release, it holds us in its rabid grip once again. 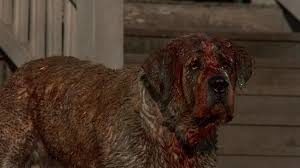 After Cujo’s nose is bitten by a bat, after he chases a rabbit into its warren, he slowly begins to turn on his human masters. The family of advertising executive Vic (Daniel Hugh-Kelly), his wife Donna (Dee Wallace) and their son Tad (Danny Pintauro) visit Cujo’s owner Joe ( Ed Lauter) who runs an auto repair. There they meet Cujo. Just after they leave he attacks the towns drunk and kills him. Then his owner and now he has a taste for more blood. 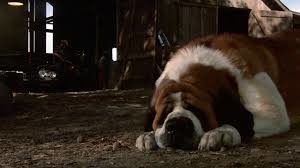 CUJO proves that as a work it is on par with the horror master. King filled Cujo with a supernatural tone that is dispensed with here. This is the films real strength. Playing reality with devastating results. Lee Gambin focus the first half of his, frankly 100 mile an hour commentary on this. Gambin levels out in the second half but is still on the money constantly. 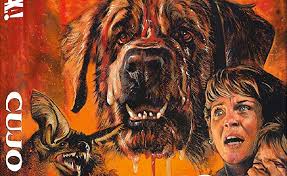 He did write a whole book on the film. Though it didn’t deserve it. A large portion of the other extras add nothing to the films experience bar the Limited discs extras. Kim Newman is not fully on form here. He is overstretched I feel. Dee Wallace from Cinemaniacs & Monster Fest 2015 is excellent. Well done again Lee Gambin. The attention to her work (he is a fan!) 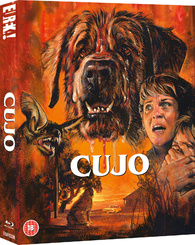