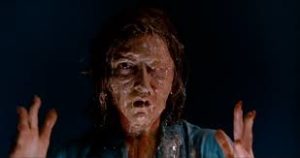 Ever wanted to go on that diet that has all of those vitamin drinks and feel the benefits of all that artificial goodness? Well BODY MELT might change your mind forever. Filled as it is with the by products, all of those oozing orifices, bubbling body parts and mushy membranes. Philip Brophy (musician and occasional film maker) directs and part writes the best Australian satirical horror film ever. Now this is saying something from the land that brought us PATRICK, RAZORBACK, TURKEY SHOOT etc. 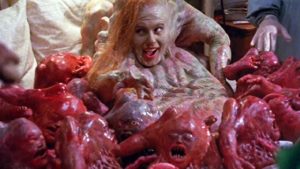 “Vimuville” dietary supplement pills arrive in an assortment of peoples  mailboxes in the sleepy Melbourne suburb of Homesville. The residents aren’t worried about it. They are more concerned with the car that crashed in the street outside. The body left on the drive had guts and grim glop, dripping from him. However as more and more residents are eating the pills, the effects start to take ahold. Stage one is hallucinations, Stage two is Glandular…but its stage three that has all the exploding penises and imploding heads…that is BODY MELT. 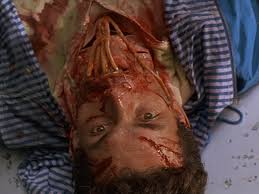 The health craze that swept the western world (from the 1920s until even today) reached its zenith in the late 1980s. Philip Brophy (dance music pioneer and member of Tsk Tsk Tsk) gets the core issue with the industry and its acolytes. Its about the exterior without care for its internal workings. So the body is consumed and destroyed and the being is left a hulking mess. Philip Brophy swipes at the concept, the consumer, the chemistry and the side effects in equal glorious body morphing delight. 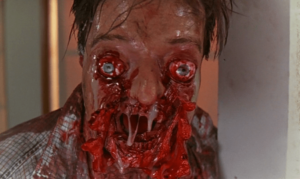 I suspect that Brophy had seen Brian Yuzna (that other great body horror satirist from the age of the indie) SOCIETY. Both films share a distinct understanding of the societal effect of the body political. Control and contours mean good money and genes. What Brophy gets wonderfully right is the Aussie sense of humour in parodying the empty facetiousness of the whole. How it is so empty and in the end leaves nothing but a rich corporation in its wake. 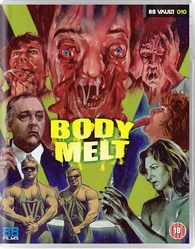 The gorey goodness has been restored. I have the Umbrella version and this is the same great print. The 5.1 Re-mix is approved by Brophy and shows how good that soundtrack is. Best feature? Brophy Commentary tops the list. Funny and witty but with so much detail to it. Brophy is a legend and you can tell that, as his only film he cared so much about the subject and the satire that he could not find anything later to stick two fingers up at.