The Devil Wears Prada director, David Frankel returns to the big screen with the stunning Meryl Streep (who appears to get sexier with age?) who previously brought alive the vicious, fashion editor, Miranda Priestly in the 2006 film also starring Anne Hathaway, Emily Blunt and Stanley Tucci. But this time, Frankel puts Streep into a very different situation, stripped of the high end fashions, mouthy, hard exterior and instead places her into the typical suburban home as a yearning and very lonely wife – is this a change in direction for Streep’s powerful performances (considering we last saw her play the hardest woman, Margaret Thatcher in The Iron Lady)?

The short answer to that is, no.

The long answer can be found in the rest of this review.

Hope Springs finds Kay (Steep) and Arnold (a very funny (at moments) Tommy Lee Jones) at a point in their lives where they aren’t talking, they aren’t enjoying being in each others company, they aren’t sleeping in the same rooms and most importantly, they aren’t having sex. Now to a certain extent, yes, Hope Springs does deal with sex like any other Hollywood film; at times there isn’t much depth to discussions surrounding it and yes, we are listening to ‘older’ people talking about sex, which is about as cringy as listening to your parents talk about it but Hope Springs at moments flourishes in the cringe, in the humour and does allow moments (albeit it, brief) of deep, emotional discussion.

Kay and Arnold are married, have grown up children and lead very separate lives but Kay spends her days yearning for something more, yearning to be kissed and to be touched by her husband, who falls asleep watching the golf on the sofa. One day she decides to go in search of the good ol’fashioned Western way; the self help book (a phenomenon in it’s own right, but not the right discussion here). Enter the token humourous scene of her picking up books about sex and a variety of sexual positions, whilst making faces and making the audience feel comfortable but then she stumbles upon a book written by Dr Bernie Feld (the brilliant Steve Carell), which really opens her eyes up to what she is missing within her relationship. Once she books the couple into intensive couples therapy, we have the usual sequences of them trying to have sex, getting angry at each other, having some time apart and reconciling – that is what we expect but what really stands out in the film are the scenes inside the doctor’s office.

They are simple, they are plain; there is no explosions or tricks of the mind or particularly illuminating cinematography, but instead harshly accurate, touching scenes of a couple who are trying to find each other again after a long time living along; together. Carell is possibly the best 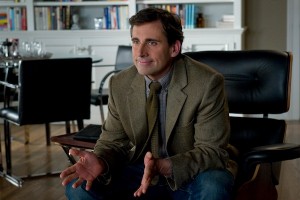 thing about this film, and I have to say, this is the best role I have ever seen him take. The doctor is calm, even at times of anger (usually from Arnold), suggestive and knows how to balance the serious with the sensitive – he may not take many of the funnier lines in the script but he does ground the film in a reality known to a lot of the audience – those of relationship issues. When the three of them sit in the office, it is like the outside world is completely forgotten and instead they have to rely upon the script (written by Vanessa Taylor) and their own acting skills (as well as each others, to allow the discussion to physically bounce around the room).

What I found particularly difficult to believe was that Kay really was as weak willed as she seemed at the start of the film – this may be more to do with Streep rather than the character, but she was very softly spoken and mostly gave into those around her, there were points in the film that I wanted to stand up and shout, GET A HOLD OF YOURSELF AND LEAVE HIM! But this may be me coming from a naive standpoint as a single, young adult who hasn’t been married for the length of time as these characters. Kay very clearly relies upon her husband, and in return he shuts his bedroom door, Kay wants to fight for their relationship and Arnold seems disinterested. But as the film progresses you don’t see simple resolution, this was something I was particularly excited about – it wasn’t a simple, kiss and make up story – there was work they had to do and even at the end, despite their coming together, you know they have to work for their future.

When the two of them touch, it doesn’t seem uncomfortable for these two brilliant actors, but I have to say that I felt Jones’ performance was a little changeable throughout the film – the scenes when he shows passion and commitment to helping their relationship were his strongest, but at other times he was a bit unbearable to watch because of how unlikeable his character was seeming. 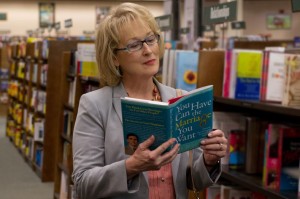 The film itself is very pretty to look at and easy on the eyes, with a colourful palette reaching from the clothes that Kay wears, to the coastal village they visit, through to the minimalist office they spend a lot of time in. But it is also at the peak of their therapy when they spend a night in a hotel that colour bursts through, the crimsons and the golds scream out at the audience and make the surroundings shine. It’s just hard to comprehend the negativity of the end of that sequence, but I will let the audience decide what they think.

In terms of a romantic comedy drama, Hope Springs, does tick the required boxes. It’s funny, dramatic, well written and acted but it does pull back at moments of drama, which could have exploited deeper issues within their relationship but then it possibly wouldn’t have been a funny film. Sometimes Hollywood does surface extremely well, and this is no Altman film, where the very surface is that which is being explored but Hope Springs is witty and touching and well worth a visit.