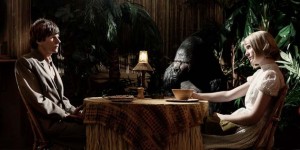 Richard Ayoade (Submarine) returns with The Double, a modern retelling of Fyodor Dostoevsky’s novella, which really poses some of the most intelligent and frightening questions to have ever come out of cinema. Starring Jesse Eisenberg and Mia Wasikowska, The Double follows Simon (an incredible performance from Eisenberg), a timid young man who is just another number in a factory. He is ignored by those around him and leads a very mundane life, lived through routine, with little idea about where to go from here. Ultimately the forces of this dystopian world he lives in are far too strong for him and he feels little power to be able to fight back. But everything suddenly comes into perspective, when a new worker appears at the factory, James (also played by Eisenberg). They look exactly alike, except they couldn’t be anymore different. James is strong, confident, unafraid, sexy and everything that Simon wants to be. But no one except Simon quite sees the similarity in looks…

Wasikowska stars as co-worker, Hannah, the love interest for both Simon and James, except of course it comes easily to the latter. She befriends Simon in the hope that he will know if his double is single or not – but never for one moment does she feel the same attraction for Simon. But this relationship is just another nail in Simon’s proverbial coffin. On seeing the attention James is getting from Hannah as well as their boss, Mr Papadopoulos (Wallace Shawn), Simon decides to try and make a name for himself and not just become another faceless, nameless cog in the machine. But this becomes more difficult, especially when his entry badge doesn’t work and the security guard that signs him in on a daily basis doesn’t remember him.

For fans of Submarine, there is a host of faces that appear including Craig Roberts, Paddy Considine, Sally Hawkins, Noah Taylor and Yasmin 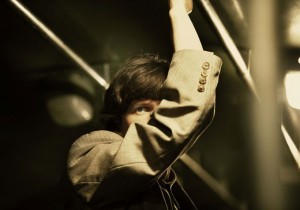 Paige, all of whom provide a slight giggle for the audience that are aware of Ayoade’s previous work. This reference does allow the audience a breather amongst the intense darkness of the surroundings and the story itself. That is not to say that there is no humour, because as one would except from Ayoade, this is in fact one of the most darkly comic films to have arrived in years and one that strictly understands and appreciates where humour would work. Ayoade’s filmmaking has also grown up and matured since Submarine, he has referenced a whole smorgasbord of film history in The Double, from German Expressionism to the American Noir to the British Realism. The streamline colour scheme further illustrates the humdrum of the world that the characters are living in and very soon the audience actually become comfortable with the use of blacks, greens, greys and browns.

This is also a very intense piece of work, with Ayoade favouring the use of close ups to his characters. This represents a need for intimacy for the audience with the characters, especially as the film goes on and the pace quickens. As well as this, he also manages to alienate the audience in the most magnificent of ways by losing them in the plot and deeply immersing them in the world. The Double is also a stunningly subtle piece of filmmaking highlighting that Richard Ayoade is one of the brightest and most bold directors we have in Britain today, from the characters working in time to the non-diegetic (or as the audience are forced to ask, is it?) soundtrack to the recurring motifs of the film, which brings the audience into the lives of the characters further but also highlight the routines of their lives and that ultimately nothing will ever change. Everything that is seen on screen is cleverly calculated and means something, which certainly makes for an endearing watch. 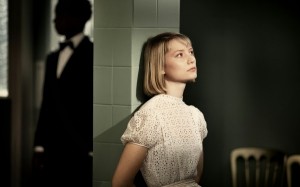 The Double is the most ingenious British film of the last decade, fusing together the atmosphere of Lynch, Strickland and Gilliam with a smattering of Kafka and Orwell, all doused in the darkness of Dostoevsky. It is wonderfully directed and acted from all involved, in particularly the work from Richard Ayoade, who has set the bar high for his next piece of work and Jesse Eisenberg who plays two complete opposites in a fascinating and compelling way; proving that the most horrifying person you could come across is yourself. The Double is truly a masterpiece of contemporary British cinema.