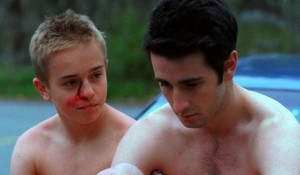 Queer cinema is currently taking leaps and bounds to break away from its status as a peripheral movement and Peccadillo Pictures seems to have been spearheading this wave for a number of years now, distributing high profile films such as last year’s Weekend, 2011’s Tomboy and 2007’s XXY. The ninth in their series of collected short films is a fantastic example of why queer cinema is moving out of the closet and into the public eye – without exception, all the shorts featured on BOYS ON FILM 9 stay true to the spirit and purpose of the queer cinema movement, but without alienating heterosexual audiences. This is not only cinema for a minority, but also manages to be cinema that can educate the majority on what it means to be gay.

The collection starts with a miniscule gem: Bretten Hannam’s Deep End. The film is an unpolished diamond that concerns a young adolescent coming to terms with (what appears to be) his older brother’s homosexuality. Conceptually it shows a perfect understanding of the short cinematic form, giving the audience just a small snapshot of a much bigger story. Although the dialogue feels a little clunky at times (and the delivery, forced), certain images remain striking and poetic: for example, a swimming pool clouded with dirt and leaves, with a dirty old book floating in there; or a shot-reverse-shot of his angry and confused face and the graffitied ‘faggot’ on his brother’s school locker. To a certain extent, my criticism of the dialogue is without worth, as it is these images that bestow the true meaning and art of the piece.

Up next is Family Affair, a domestic drama set in Brazil. Here, the script is full of the beautiful awkwardness of familial communication, creating a fantastic portrait of characters who desperately want to make a connection with each other, but don’t know how to. A fascistic older brother and a passive father create victims in the suffocated mother and the gay younger brother. The mundanity eventually gives way to an explosion of passion that is masterfully handled.

Together is an exceedingly handsome British short that begins with lovers in a coffee shop deciding to move in with each other. It starts off looking like a 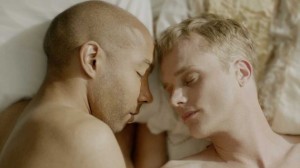 mawkish romance, but very quickly some unseen threat brings the film into horror territory. The film is incredibly cinematic and full of shocks and thrills, which is refreshing to see as so many gay films stick to gritty realism to convey a message. That’s not to say that Together has no message; on the contrary, it uses the horror genre to offer some genuine and important social commentary. The unseen threat is a symbol of the constant oppression of a society that is still homophobic – this is also reflected in the fact that one of the pair clearly feels that he can’t fully express his sexuality in public places.

Together is just the first of a few of the shorts on BOYS ON FILM 9 that show off the broad variety of styles and genres in a collection that still coheres thematically. Both of the next two films, Easy Money and The Wilding, demonstrate similar changes of direction. The former concerns a strange proposal given to a male prostitute – to say any more would spoil the fun of this darkly humorous little thriller. But behind it all are subtextual themes of gay performativity, social-sexual subversions and cinema itself.

The latter is a prison movie about a gay couple sharing a cell and the harsh world that they are forced to confront everyday (a microcosm of society). The setting of a prison has been used as a metaphor throughout the history of cinema; here, it symbolises a society wanting to brush things under the rug, as well as the feelings of being trapped by one’s own identity. It’s a truly kinetic production and subverts all the conventions of the prison movie genre: the frustration of being locked away, the pent up tension, the claustrophobia; these all take on new meaning here. Surprisingly the film also manages to make space for tenderness and romance, the success of which is possibly down to the fantastic cast who collectively give what may be the best performances in this collection.

Following the blood-pumping excitement of these films is Colonial God, a quietly devastating film that touches on issues, not only of homosexuality, but of race and class too. It follows a number of Nigerian and Somali immigrants struggling to make a living in Wales. Voice-over is used incredibly effectively, providing a beautifully poetic commentary to the dull realist images of working class Wales. Overall, however, Colonial God feels like a story that has been told before – it seems to me that queer cinema is mainly about pushing boundaries and this simply doesn’t. Personally I found this to be one of the less memorable of the collection; that, however, is not much of a criticism considering the significant talent at play.

From council houses in Wales, we come to a school toilet in France with It’s Not A Cowboy Movie (The title alludes to the fact that the two boys in the film are discussing Brokeback Mountain). This wonderfully observed little comedic film is about the limbo between childhood and adulthood, where innocence is tainted with little bits of information about a world that is still mysterious and makes no sense. The dialogue evokes the ‘playground world’ of youth, where one is simultaneously trying to fit in whilst also discovering that they’re an individual. It’s funny, emotional and authentic, and may be the most blissfully enjoyable of the lot.

The collection ends with PRORA, about a gay kid spending his summer hanging out in the eponymous would-be beach resort in Germany with his 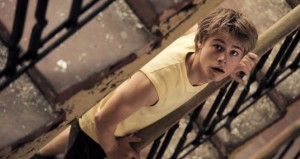 straight best friend. The cinematography is, at times, breath-taking with some sweeping aerial shots that give the film an epic scope, and also wonderfully capture the beauty of summer holidays with stolen booze and no responsibility. The history of the setting and the boys’ very different reactions to it is a great story-telling device and also gives the film several layers of meaning (on top of simply looking great on screen). The sweet film provides the perfect end to BOYS ON FILM 9, which is an absolute real treat. If this fantastic collection is anything to go by, the future of queer cinema looks very bright indeed.

If you want to watch the trailer or rent the collection now, click below.