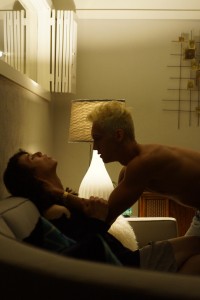 Boys on Film 12: Confession offers a range of exciting, thought provoking and sometimes confusing short films all centred around something a bit gay. With nine different shorts from all over the world, the new collection is full of boys going through some sort of journey, whether it’s a night in the life of a hustler, a naked wrestle in the woods or even a bit of drag.

Like all of the series that have appeared over the years, some stories are certainly better than others. Good Morning starts off with a man waking up the morning after his 30th birthday party to find out that, to his horror, he’s brought a 17 year old home. Cue the awkward squirminess. You sit there as uncomfortably as he does as the boy goes over the night with him, then share a sigh of relief on his behalf. After some imparted wisdom it looks like friendship is on the horizon but as we all know bouncy teenagers are annoying when hangovers are involved, so he soon shows him the door.

Actor Jake Robbins is certainly making a name for himself as he starts and ends the collection with Home From the Gym and Tonight It’s Me. Two very different short films that show a struggling young man undress alone in his apartment and then a young hustler who spends the night drinking shots and cozying up with a Trans woman. Robbins is quite the looker, so obviously he has to get naked in both of them. In between the two is the usual range of short films trying to be as ominous and surreal as possible as they show just how different all aspects of the LGBT are.

If you are fan of the B.O.F series then you know there’s always a loose theme running throughout the short films and this 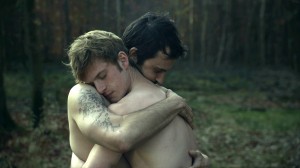 time it’s the bits of the boys that you don’t see (no, not those bits), the secret tears, fears and alter egos that the boys only show when they think no one is looking. Obviously some of the boys are a bit more open about it than others, but then that’s life isn’t it? There are a few moving pieces that give you the old lump in the throat and there’s the odd moment where you’re thinking ‘Stop throwing yourself at that priest, young man!’

Confession definitely has something for everyone, if you’re into watching delicious young men get undressed or sexually curious marching band drummers then look no further! You can expect to buy your very own copy of Boys on Film 12: Confession on 24th Nov, so mark the date and keep your ‘Do Not Disturb’ sign at hand.