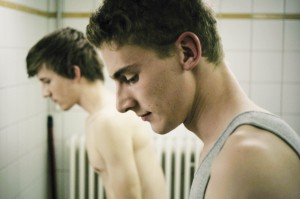 Silent Youth follows two young men as they each undergo a journey into the vast unknown that inevitably arises at the start of any relationship. The film begins with Marlo played by Martin Bruchmann, who is out on the streets of Berlin when he happens to notice a mysterious boy as he crosses the road. The allure thickens as the two brush hands lightly and both do the typical head turn in order to catch the other’s eye.

Next we see Marlo traipsing down the dark alleyways and underpasses of Berlin until he finds the hooded youth in the middle of nowhere. There is obvious chemistry between the two, Marlo clearly wants a honey and luckily for him Kirill is also in need of a boyfriend. Bruchmann puts on a strong performance, using body language and eye contact to safely navigate Marlo’s way through Kirill’s wearisome company, this is particularly helpful considering the lack of dialogue from start to finish. (There’s a reason they called it Silent Youth)

Opposite Bruchmann we have Joseph Mattes as Kirill who, unlike Marlo, is in every way the tragic youth with the fringe and the ‘please don’t hit me again’ eyes. Whilst it’s hard to like Kirill (even Marlo starts to get a tad ticked off), Mattes plays the traumatised chap so excruciatingly well that it soon becomes clear that the ongoing tension that runs from start to finish is emanating entirely from him. Whether he’s taking ‘pass me the soap’ as a hint to wash Marlo’s hair or showing Marlo the kind of car he crashed before fleeing Russia, Mattes performance is both exceptional and exceptionally cringeworthy. 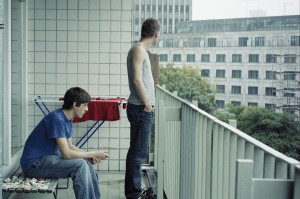 Silent Youth feels very much like the edgy, thought provoking short you would normally find in the Boys On Film series or happen to stumble across late at night on YouTube. It certainly mentions some real issues faced by gay men today. For example Kirill tells Marlo how he was ambushed in Russia, explaining the bruises on his face. Perhaps it would have served better as a short film instead of a full length feature. Yes the point of the film is the long drawn out silence but after a while you find yourself twiddling your thumbs and reaching for your phone.