FrightFest 2015: Over Your Dead Body Review 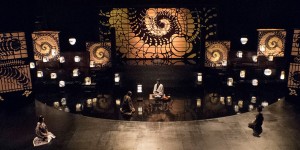 Audition, Visitor Q, 13 Assassins; for over two decades Takashi Miike has been telling stories and creating films that have changed the many faces of cinema and haunted viewers. He returns with Over Your Dead Body, a carefully structured and impeccably paced horror drama based on the a 19th century kabuki play, Yotsuya Kaidan, a story within a story if you will. In Miike’s take on the traditional ghost story, he blurs boundaries between reality and play that his characters are rehearsing (a version of Yotsuya Kaidan) in a fashion akin to Berberian Sound Studio and quickly the audience are forced to discern between whether it’s the characters of the film or of the play that are talking.

Ebizô Ichikawa plays Kousuke alongside Ko Shibasaki as Miyuki, a pair of actors who are also lovers. They spend their days taking part in an intensive dress rehearsal for their production of Yotsuya Kaidan in an incredibly stylish and modern theatre with a rotating stage. Kousuke plays Iemon, a Samurai who prefers to find himself in amongst a midst of moral ambiguity – he is married to Miyuki’s character, Iwa, a quiet and slight woman who knows that she is being wronged. Both Iwa in the play and Miyuki in reality worry that Kousuke/Iemon is having an affair with a younger woman (played by Nakanishi Miho) and they would be right to worry.

As the days of their rehearsals go on, the lives of these actors starts to mysteriously mirror the action of the play and so it isn’t a leap when a supernatural force begins to play to take it’s part in a game of betrayal and revenge. Whilst in the play Iemon poisons his wife, in the hope that she will die and that he can move on to the younger woman, things don’t quite turn out as planned and in reality, it is Miyuki that starts to take action against her lover. A cataclysm of shocks force the characters to all try and figure out what is next for them but ultimately it is going to lead them to a fate worse than torture.

Miike’s Over Your Dead Body is a incredible piece of cinema; he has created in this world a stunningly shot film about people first and the supernatural 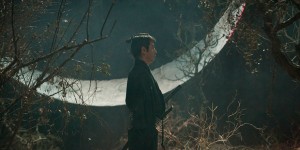 second. His work has often traversed the supernatural, the surreal but also Japanese history (and his interest in the character of the Samurai), but this film perhaps marks a new chapter for his work as he brings all these components together to create a bloodthirsty, suspenseful story about the dark things that people can do. His cinematography is gorgeous, blending the set of the stage that the actors are working on as it revolves (an interesting note that the characters often find themselves going around and around) with the various other locations that the characters live within. A powerful juxtaposition is created between the traditional, highly colourful and detailed stage of the world in the play with the vast minimalism of Miyuki’s house that the lovers frequently meet. The dark colours of the stage melt beautifully into the whiteness of her home as the characters and the audience are taken back and forth between both locations.

As the final climatic sequences begin, the real power of Over Your Dead Body is revealed. Miike has created an evocative intensity and a starkness in the film so that the audience don’t quite realise how complicit they are within the story and how involved they have become. The supernatural elements have turned the entire world upside down for the actors and this seeps out into the locations as well. As with the best ghost stories, they twist and turn so that the audience aren’t quite sure who to believe and when and Miike understands the way this works as well with a fantastically twisted and unpredictable ending.

Over Your Dead Body is a tantalising concept, filled with enough ghouls for the casual viewer but also a glorious depth and understanding of the genre for those more invested in what this film means for Miike’s career and the genre as a whole.