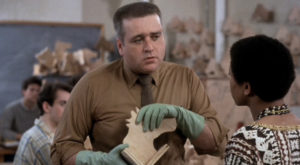 ‘During this period in time there were 3 or 4 films released as the horror comedy… this one was just at the wrong place and wrong time’. This sums up 1981’s sharply observed satirical gem STUDENT BODIES, brought to us by 88 films.  Riffing off of the deluge of slasher films from the period, from HALLOWEEN, FRIDAY THE 13TH and PROM NIGHT. We follow the anonymous murder as they kill there way through a high school. Using all manner of strange and sardonic tools at their disposal. 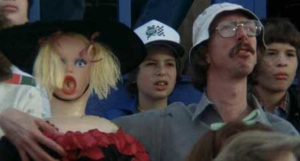 As Callum Waddell says some 10 minutes into the commentary on the disc (which is well worth listening to!), many of the films from the genre were conscious of their inspiration and were riddled with in jokes to that effect. From Tobe Hopper’s nods to PSYCHO, to Carpenters love for TCM, it all made the films ripe for parody. They didnt take themselves seriously and neither does STUDENT BODIES. Making it both great to watch for the fan and the expert but also witty without the meta insider details of the SCREAM films. 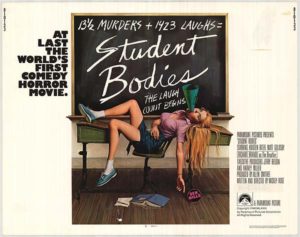 88 Films have the ability to amazing and enrage sometimes. Here they have amazed us. The 1080p HD gives STUDENT BODIES a nice feel. The grain is still there but this makes it feel cinematic and this is a good thing! The commentary see Waddell talk more than Justin Kerswell, but both know there stuff and both give enough in terms of background and quips to work it out. The best bit is the talk on the film lack of success. The best extra however is that Back to School Kim Newman piece. Newman can often be seen as the go to guy. Which is both great and representative. Here he has a lot of range in his discussion. Reflecting on the context and content of the film.