Kung Fu cinema swept into the London market after the success of Bruce Lee’s films. Jackie Chan came to the fore because of this. Lo Wei’s DRAGON FIST was not that film but it would appear later as his star ascended.

A tale of revenge, it sees Chan having to fight a diabolical villain. A villain who stole the honour of his master by beating him and reclaiming his standard. Then making matters worse, he murders his master and leaves without a sorry.

I am not a Kung Fu historian or master. I am also not really a fan of the genre. However within DRAGON FIST you have two elemental forces of Jackie Chan (then Jacky), who is about to become a master and major star and Director Lo Wei. Its action packed, the camera is never static, it packs in a sufficient plot which could be awkward occasionally. It comes out on top. Just. If you are a fan, you will walk away happy. 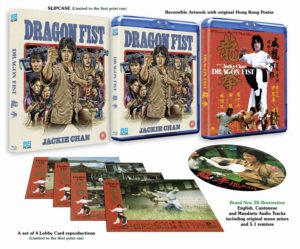 The 2K Scan is presented in 1080p but it looks good and sounds amazing! Lovely rich colour, some wear on a few scenes but its rare and never takes anything away from the film.

Two things stick out. The first is David West interview. He documents more Lo Wei than Jackie but its well structured and concise. West knows the genre and the history. He also knows how to communicate it. The other thing is that cover. Great work Dude Designs…