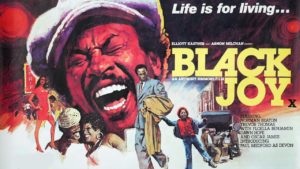 The streets of London have seen immigration and intergration since Londinium. From the end of the Second World War, immigration from the empire blossomed. Much needed workers came to fill jobs. In BLACK JOY, we have a comedy about the clashes of culture and identitiy. Ben Jones, a Guyanese immigrant arrives at Heathrow Airport. Newly arrived into a place, where his father (a seaman) might be. He has a suitcase and a wallet full of money. Ben travels to Brixton in search of an obscure address that might never have been. While looking, he is followed by Devon, a young boy on the grift. Stopping at a pub as his waystation, he meets Dave King (Norman Beaton), a scammer and crook. Then from the pub he is led down one street and into another. Ben is robbed by Devon. This leaves him broke, without a home, family or friends. He meets a young lady Miriam (Floella Benjamin). Could this be a way back? 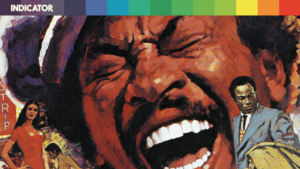 I have never seen BLACK JOY. So until I sat down to it this week, it was an unknown quantity. I was lucky. Its much more then what its varied critical details seem to suggest. Based on Jamal Ali play and his adapted screenplay of the same. The tale of a lonely Guyanese immigrant, both unprepared and ignorant of the modern world of London. He meets scamsters, grifters, chancers and finally hope. Like many who landed on these shores, from my own family to those of the LONELY LONDONERS. The story navigates their world. From expectations of a dream life sold to them via adverts and talk. Its a time capsule, its a clever comedy about fitting in and not. It joyously comedic, insightful and savage. The grifting, the grime, the social cohesion and diffusion. All of this I loved. Capturing a moment when London was (and it still is) shifting into another era of change. 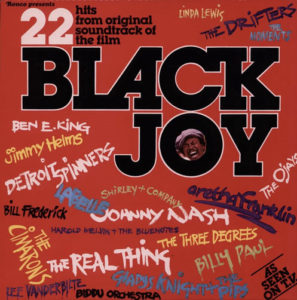 THE DISC
The HD master could have been super sized, over cleaned and made to be crisp. However the correct intention of the original has been kept. The image is grainy but clear, fresh like a crisp morning but still grimey enough to feel deep. The move is remarkable enough. Once you see that cinematographer Phil Méheux, had a hand in it, you understand it is obvious.
THE EXTRAS
So what are the top 5, yes 5 you heard me right.
1 – Dark Days and Light Nights. Jamal Ali is a vocal and energetic speaker. He uses this piece to cover everything he has done in his career. From Pierce Brosnan and highlights of the growth of a group of artists in black thearter. Shifts to BLACK FEET IN THE SNOW and DARK DAYS AND LIGHT NIGHTS touring to the final filming of BLACK JOY. Its something to understand an artist and his works are percieved as getting something worth channeling.
2 – A People Story. I love Floella Benjamin. Not only from being a childrens television star, as I grew up with her. More it is to how she is as a woman. Performing on film and understanding scenes. She is a lovely woman and a very skilled actress. Her skill as an actress and work as a woman of colour, taking on domestic violence and Cannes take on her. 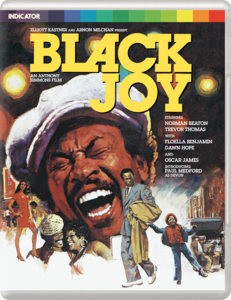 3- Benjamin’s Brixton. 3 minutes of joy for a lover of London, cinema and the like. We tour the sites of Brixton from the station to Atlantic Road. Also deciphers some of the odd slogans, history of development and maybe even lets you see how the Bronx and Brixton had similar terrain.
4 – Guerrilla Operations. Martin Campbell, (yes he of Bond and the like) talks his career. From the SEX THIEF, via producers work and Elliot Kastner and the way meetings are done. From spend to spend. So to speak. Kastner liked the film enough to put his name on it.
5 – The BEHP Interview with Anthony Simmons. This I  mention for the work of the British Entertainment History Project. Go and find out more. Lynsey Ford is a great advocate of the organisation and is worth checking out for this reason as well.
INDICATOR LIMITED EDITION BLU-RAY SPECIAL FEATURES: