Attack of the Adult Babies is awash with genre goodness. Its clear to see even from the press that has flooded our peripheral vision these last weeks. Frightfest were so impressed with Emmerdale’s Dominic Brunt and producing partner Joanne Mitchell trash bash, they backed this film for major distribution. Rightfully so if you read the synopsis or the reviews around town. Its gutter fun but of the best kind. The plot? Well it goes like this. So when Two teenagers break into a remote country manor, they are the obvious teen offal that prowl the streets up to no good. However once inside they find that influential men, within rich and wealthy sub strata of society, come here for abandon. They dress as babies. They live like babies. They act like…monsters. 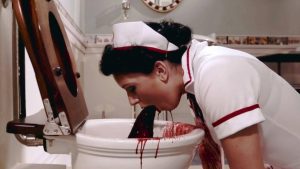 Now do not get me wrong, this film knows its market and knows its origins. Its playfully trashy. It has buckets of grue and blood dripping from every end. It is also clever in that the film knows what it is setting out to achieve. No delusions of grandeur here. This enables it to be witty sometimes in its observations (often to films of yore, that time before VHS and DVD). Titillating in its sexuality (and that is also casting back to films of yore). My only issue is this. Its so throw away. So empty in its urgency and logic that it fails to hold up. The directing is lazy when not riffing on comic ideas, film genre or exploitation troupes. The jokes are average and you see them coming sometimes at intervals that spoil the set up and pay off. Its a fun tongue in cheek film but falls on its head with a lack of sophistication in its sardonic wit. 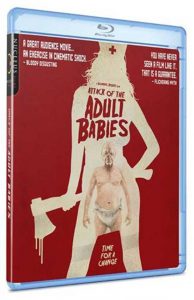