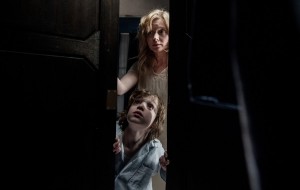 The Babadook, equal parts imaginative and terrifying, is one of the finest additions to the genre in recent memory. The film follows Amelia, a widowed mother struggling to keep her head above water, and her ethereal son, Samuel, whose obsession with monsters and Kevin Mcallister-esque ingenuity with weapons is beginning to cause them problems.

After reading a book that mysteriously appears in their home, Samuel starts to talk nonsense, interacting with Mister Babadook. As Samuel’s delusions get worse, Amelia must take him out of school, finds herself alienating her sister and the rest of the outside world. When the book reappears, and she starts to hear bumps in the night, she begins to question whether Samuel is delusional at all, or whether Mister Babadook is stalking them.

Whilst its premise might sound a little familiar, Jennifer Kent’s film succeeds through its imaginative nature and its references to early genre films and classic fairy tales. The film opens on Amelia (Essie Davis) on the night of Samuels birth, as her and her husband crash on the way to the hospital in what is one of the most visceral and memorable crash scenes I have seen on film. It is a striking beginning, and sets up the complicated nature of Amelia’s relationship with her son.

Rather then the necronomicon, or the book of the dead, or the diary of the Buckner family, Mister Babadook’s book is a twisted and haunting pop-out book. The images of which are still burned in 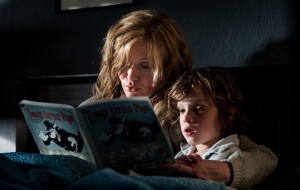 to my eyes. The Babadook himself is scarier then any offering I can think of that we’ve seen recently. The Mama in mama looked awful, the red-faced insidious ghost was laughable but Mister Babadook has the ability to become an iconic horror monster, something we haven’t had for decades, with Nosferatu fingers and his floating-come-skittering movement is nightmare inducing to say the least.

The films scares are completely original and often psychological. The directors unique vision is clear and is wonderfully demonstrated by the films two leads, Essie Davis and Noah Wiseman, thelatter of which could sit up there with Danny from The Shining and the little girl from Poltergeist for most wide-eyed movie child. The film’s themes speak towards the unique need of children for love, and the film plays to the psychological fear of presumably everyone, that there mother may not love them.

At times the films humour comes at strange times, strangely juxtaposing its psychological horror, and that is perhaps its biggest flaw. It is a wonderfully constructed, imaginative and frightening film, and one which, as a fan of the genre I will watch several times.