Alistair Legrand’s The Diabolical jumps right into proceedings with a pre-credits scare. Madison (Ali Larter), a mother of two, sits late into the night with her computer looking at how she can avoid bankruptcy. She starts to hear scratching and is adamant that this is all in her head, when she sees nothing appear and the scratching goes quiet she believes she is safe. Looks back at computer, back up and sees a disfigured demon moving towards her screaming – Madison backs up towards the window, repeating over and over that it is all in head before the demon disappears.

A fun introduction of course but right away the main issue of the film is up front and centre – the audience are just not given time enough or a reason to care about the characters and what happens to them. The best horror films often build up the suspense and tension, giving the audience time to learn about the characters so that when some kind of monster/demon/evil etc turns up on screen to kill/maim/scare, they care about the wellbeing and outcome. What reason has Legrand given for anyone to care about Madison?

The audience see a family who are having money issues – Madison is all alone, looking after 2 young children and trying to keep her new boyfriend, Nikolai (Arjun Gupta), a scientist who has agreed to look into the crazy paranormal activities of her house that even the experts are too afraid to look into. But unfortunately, Insidious this is not. A mysterious man, Austin (Patrick Fischler) keeps turning up at her house to find out whether she will sell for above market value to his company who are looking to buy all the houses in the area. When she hesitates, he explains that his company is connected to her mortgage company and they will make trouble if she doesn’t sell.

A redeeming aspect of The Diabolical are the moments when the ‘demon’ of the film turns up – he is actually scary. Whether it is crawling along the floor out of a 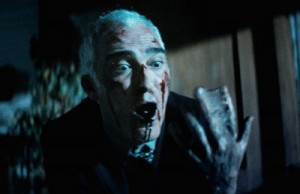 washing machine or sliding through walls and floors, the strongest moments of the film are the attacks as they happen because there is no way of knowing the limitations of the monster. It also looks great; melting skin, bleeding all over, seeping across the screen and really pulling the audience in. It is just a shame that the intensity of these moments falls apart when the other characters come back on screen and are trying to work out what is going on. There are some real genre bending moments and there is so much potential to bring together elements of horror, science fiction and good drama but it all seems just a little too much for this film.

Truth be told, and it’s hardly surprising, Ali Larter is great to watch – but then again, she always is. She is great at running from child to child in constant horror and then doing some screaming at something that may or may not be there.

Certainly not as bad as the name suggests, The Diabolical is well made film with a story that has been told many times before but unfortunately it doesn’t tell it any better.