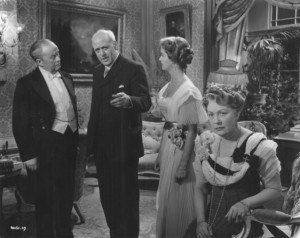 If there’s one thing British films, plays and literature do well it is the representation of class and the often detrimental effects that the British class system has on social relationships. One such film that exemplifies this is Guy Hamilton’s An Inspector Calls (1954), which celebrates its 60th anniversary and is fully restored by Studio Canal on DVD and Blu-Ray.

Based on the J.B Priestly play it focuses on the rich and privileged Birling family and concentrates on a single night in their mansion in 1912. On this night they are about to celebrate their daughter Sheila’s (Eileen Moore) engagement to wealthy businessman Gerald Croft (Brian Worth) when they are abruptly interrupted by a mysterious Inspector Poole (Alastair Sim). He arrives out of nowhere and quickly darkens the atmosphere with the accusation that the whole family were responsible for the death of a woman Eva Smith (Jane Wenham), who the head of the family Arthur (Arthur Young) once employed in his factory. 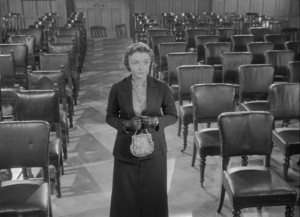 As family secrets start to be told, the film flashbacks reveal each member’s relationship with Eva, and we learn that despite their denial of responsibility each one has a part to play in her death; whether that be through Arthur firing her at the factory, Sheila reporting her for impudence at her next job, or Gerald and Sheila’s brother Eric (Bryan Forbes) becoming her lovers. We see the fabrication they have concocted of being a “decent” and “respectable” family fall apart (in fact it is just at the moment that they are declaring that they are such a family that the inspector ironically arrives), and we also see the lack of compassion and disregard for their actions shown by the heads of the family. Thus bringing in generational conflict as well as class conflict, as old values of hierarchy and tradition clashes with new values of class consciousness and women’s and worker’s rights (shown in the scene in which the factory workers, Eva amongst them, demand higher pay and Arthur gruffly dismisses them). 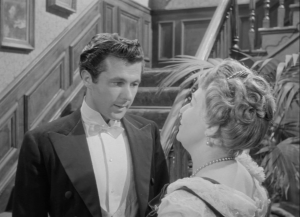 The story unfolds in a way that you really do care for Eva by the end of it, and the performances really carry the film. Alastair Sim (known for his roles in St Trinians and The Ladykillers) as the enigmatic Inspector is irresistible to watch with his all-knowing manner and sinister facial features (those heavy hooded and sunken eyes), which he uses to fine advantage in the role as he determinedly and cleverly wheedles out the information. Jane Wenham as the feisty and independent Eva is equally absorbing to watch as she feistily stands up to her employers, and bravely faces the consequences of having affairs with men outside of her class (the close up of her as she says the words that her lover doesn’t want to say-“You don’t love me” is particularly moving). Bryan Forbes (who later went onto be a successful director) as Eric is also very playing well the charismatic but irresponsible wealthy son who does what he likes, and then suffers the consequences.

Ultimately it is a great snapshot of a changing period in time in British history when many rich old people still believed that war wasn’t coming (as shown in the first scene) and that worker’s didn’t deserve any rights; while the younger generation were breaking free from the older generation and demanding change. It is also a great example of British film making even if it is slight at 77 minutes and does have a slightly confusing ending which leaves you wondering *spoiler alert* if Eva is real or just an amalgamation of different characters.