It is hard to imagine a time when anime was not a staple part of the British cinema going diet. From cult classics like Akira (1988) all the way to Hayao Miyazaki and his Studio Ghibli masterpieces, the art of Japanese animation is embedded in theatres and DVD collections throughout the country. Two decades ago when that was not the case, three films began laying the ground work for the years to come. First came Akira and there was the incomparable Ghost in the Shell (1995), but in between these two came a film arguably as important, Yoshiaki Kawajiri’s Ninja Scroll. It is considered one of the films to open the eyes of the West to anime. Shockingly violent and wonderfully eccentric, Ninja Scroll is laden with sex, death, fast paced swordsmen and fountains of the red red krovvy. Visceral and imaginative, Ninja Scroll is classic anime, modern and stylish with deep reverence for Japan’s history. 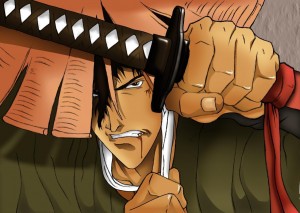 Set in Japan’s Tokugawa period, the film follows wandering ronin Jubei Kibagami (Koichi Yamadera) as he becomes entangled in an investigation of a death plagued village. Female ninja Kagero (Emi Shinohara) is the only survivor of the group sent to explore the village and is saved from a murderous monster by Jubei. This beginning is indicative of the approach of the film. Images of death and destruction, an unforgiving world of hired swords and grotesque creatures, mixing myth and magic with ever more stylish violence with the odd dash of morality discerns this type of anime from the more whimsical Studio Ghibli. The violence is mesmeric, poetic as the deaths become ever more elaborate and inventive. 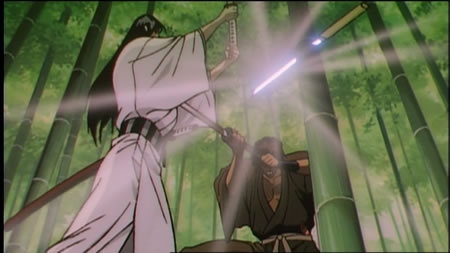 Jubei and Kagero join forces with a suspicious government agent, short and old but remarkably spry, named Dakuan (Takeshi Aono). In what at first seems to be a Lord of the Rings type of fellowship, it quickly becomes clear that each of them have their own agenda. Even Jubei who was initially tricked into helping but his quest becomes vengeful as he learns the evil Himuro Genma (Daisuke Gori) is now leader of a deadly team of demons known as the ‘Eight Devils’. Jubei and Kagero must battle their way through this super-powered gang to get the adversary Jubei thought he had slain a long time ago. In a battle of epic proportions, Jubei knows he must win or face certain death. 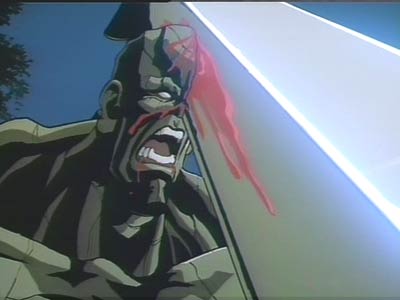 Ninja Scroll is, as with all the animation to leave Japan’s shores, visually stunning. Detail laden and intrinsically beautiful, fast paced action blends with veneration to the stunning landscape of Japan in a dynamic and engaging way, without ever appearing over the top. Fans of Chinese cinema may see something familiar in a scene in which Jubei fights a blind swordsman in a forest of bamboo, House of the Flying Daggers echoing the scene in 2004. Amidst the ruby red flowing from every gaping wound left by the electric swordplay there are nuggets of morality and sense that despite intentions and actions, there are causes to fight for and a definable line between good and evil. 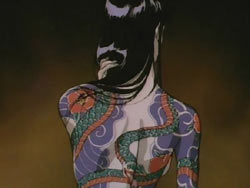 At the crux of this DVD/Blu-Ray release is a respect for the origins of anime and a historical perspective. The film will be available to view in UK cinemas from November 23rd this year for the first time ever, nearly 20 years after its initial release in Japan. It was a seed that birthed a phenomenon and culturally diverse branch of cinema which now attracts a large audience, for that alone it must be lauded. It is also a classic example of so much that is loved about anime. The visual style, the ethnography, the moralistic storytelling and the epic amounts of energetic and dramatic violence all peak in this definitively Japanese art form. It is a film that should be in the DVD collection of every anime lover and arguably every cinema fan.