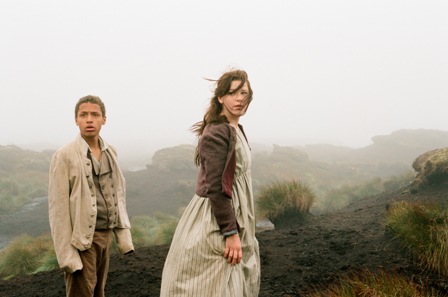 One night whilst travelling across the harsh, brutal Moors, Mr. Earnshaw (Paul Hilton) stumbles across a young boy (Solomon Glave) who, judging by his tattered clothes, lack of English and weathered countenance, has been abandoned and left to fend for himself. Being a good Christian, Earnshaw takes the boy in and aims to raise him as part of his family, over the protestations of his son, Hindley (Lee Shaw), who beats and hurls racist abuse at the dark-skinned boy, now renamed Heathcliff, at every opportunity. The one shining light in Heathcliff’s life is his relationship with Cathy Earnshaw (Shannon Beer), with whom he forms a strong bond. As they age, and as prejudice and social stratification tear them apart, Heathcliff and Cathy are caught up in a passion that is as destructive and awful as it is powerful.

There have been dozens of film adaptations of Emily Brontë’s classic novel over the years, so for any new version to come along and claim to be a bold new take on the material will always be met with some trepidation since the promise is very rarely fulfilled. (A good example of this is the recent adaptation of Jane Eyre, which purported to be an audacious new take on that novel but wound up being largely the same as every other one.) However, Red Road and Fish Tank director Andrea Arnold has found a new interpretation of a story that has been told too many times already that also reinvents the very idea of what can be done with an adaptation of a great work of literature.

Arnold establishes the tone of the film with its opening scene, which finds the adult Heathcliff (James Howson) smashing his head repeatedly against a wall until, bloodied and tired, he passes out, after which the rest of his life leading up to that point unfolds. It’s an uncomfortable and jarring opening that sets the tone perfectly; we have the elemental nature of Heathcliff, his all-consuming passion which by that point he can only express through violence, and a handheld visual style that is disorientating and intimate at the same time, placing us right there with Heathcliff as he hurts himself.

The rest of the film plays with the tension between the classic iconography of the novel and the modernity of the storytelling; the moment that Cathy meets the rich and socially better Lintons, who will come to play a big part in the story of Heathcliff and her, is subdued, and the high drama of their meeting is undercut by the decision to have Heathcliff say, “F**k off, you c**ts”, rather than something more flowery. The language of the film is completely at odds with most similar adaptations, favouring bluntness and occasional swearing over verbosity or purple prose. Everything about the film feels like a reaction against a century of overly safe literary adaptations that are unwilling to keep the universal aspects of their stories whilst updating the style and the dialogue to better relate to the times in which they are made.

The swearing and bluntness could also have been included to play to the strengths of the actors, many of whom are non-professional and struggle with the moments of high drama required of the material but imbue the more direct lines with real intensity. That’s not to say that they are completely terrible, though it’s harder to buy the romance between Young Heathcliff and Young Cathy than it is their adult counterparts, but that the film spends much of its time obscuring the dialogue, or having scenes play out wordlessly as the camera focuses on the physical interactions of the characters, gives an indication of where its strength lies; Wuthering Heights is often at its best when it uses the oppressive atmosphere of the brooding, wild Moors and the physicality of its cast to tell its story, rather than words.

Despite a somewhat weak cast, Wuthering Heights is a largely successful attempt at updating a classic for a contemporary audience in a manner which is never patronising. It takes the universal themes of the novel and addresses them in a thoroughly modern way, though anyone hoping to use it to cheat on English literature essays may want to double check some of the dialogue, since Emily Brontë may not have been quite so foul-mouthed.