A Walk Among The Tombstones Blu-ray Review 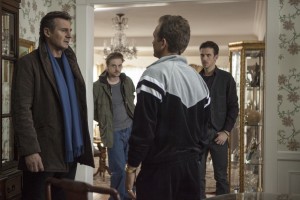 Based on the novel by crime writer, Lawrence Block, A Walk Among The Tombstones is an exciting, action packed thriller, which pays homage to the great American crime noir gone by. Whilst audiences have become used to seeing Liam Neeson stepping into Bruce Willis’ shoes as the new blighted gun wielding action star, he continues to make good choices by doing films that are all slightly different; whether they feel quintessentially European, claustrophobic or Die Hard-ish, they each have their own elements that makes them stand out. A Walk Among The Tombstones is no different – it is moody and chilling with images filled with darkness, threatening to rip away the corners of the screen and into the very hearts of all the characters. What is even more fascinating about the whole thing, is that ultimately the audience are quickly compelled to shed their morals and side with the sympathies of the drug lords because they are the ones being targeted.

Neeson has proven that later on in a career, it is easy to change your image and find a new persona. In A Walk Among The Tombstones, he is no Bryan Mills (for all your Taken fans) but instead a wounded man, with a whole life filled with a history and his own issues that he is trying to take charge of. The film begins with a flashback to a robbery in a bar where Matt Scudder, an officer (Neeson) is having a drink – he chases down the guys on the jobs and saves the day – or at least that is what the audience are led to believe. Then the story picks up nine years later, Matt is part of AA and is no longer a cop but a private investigator.

Picture it; a greasy looking cafe, its dark except for the flashing of car lights as they speed past and one of the guys from AA finds Matt and asks him to come along to his brothers house. Of course Matt doesn’t know what he is about to encounter and the brother, Kenny Kristo (Dan Stevens) announces that his wife has been abducted. The pair guilty of this crime have phoned and demanded money, which Kenny has paid. So where is his wife? After being sent on a wild goose chase through the city, he finds his wife, cut up into bits and stuffed into bags in the boot of a car. Soon Matt learns that Kenny is one of the local drug barons, hence why his house is so large and beautifully decorated, but this also answers the question for him – he doesn’t want to get involved. As fate would have it, that isn’t his final decision after he sees the pain it is causing Kenny and decides that he will help find the guys that have destroyed his life.

As the film continues, the audience are taken along and swept up instantly in Matt’s search and chase for this killer pair. He meets a 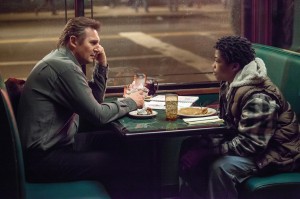 young, homeless kid, TJ (Brian ‘Astro’ Bradley) who has an aptitude for research, knowledge, spying and simply getting involved. So the pair look into the missing woman and find a similar case of a woman being abducted and murdered – her husband also worked in drugs. When he hears about the death of a third woman; a DEA agent, he realises that these guys have some sort of insider knowledge. The twists and turns culminate in the revelation of the perps to the audience and what ensues is an incredible cat-and-mouse chase, where neither party is aware of the others existence (think The Departed). When a young girl goes missing, the daughter of a friend of Kenny’s, Matt knows he has to save the girl before it’s too late and they end up with another body on their hands and memories threaten to push him over the edge.

Director, Scott Frank (screenwriter of Minority Report, The Interpreter) has achieved something so rarely found in good American crime these days. He has made incredibly delicate stylistic decisions, which almost make the film look retro with it’s dark colours and exploratory eye for the city. Bringing together both the great screenplay and the look of the film – he succeeds in creating one of the best edge of your seat American thrillers in years. Neeson and Stevens in particular are great on screen together but it’s the seemingly innocent and paternal relationship between Neeson and Bradley’s characters, which light up the screen as they play off of one another as if they have known each other for years.

A truly good crime story and well worth a watch, A Walk Among The Tombstones is not just another in a long list of cheap thrills but instead one to pay attention to.