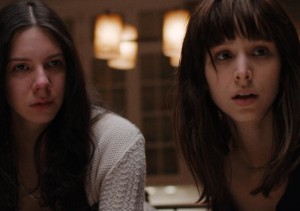 Dan Berk & Robert Olsen’s Body is a small but suspenseful thriller, which is intense, claustrophobic and a right romp amongst all the things that go bump in the night. Whilst this film has little new to offer to the genre as a whole, it does work in the favour of the filmmakers and the three leading ladies as really great up and coming talents, which makes Body wholly watchable, enjoyable and puts you on the edge of your seat throughout.

Following three girls (Helen Rogers, Alexandra Turshen & Lauren Molina) at the start of what ends up being a very long night; Body tries to turn the audience expectation around by not quite letting things turn out as they initially seem. Firstly, no one is fooled by these three girls playing a game of Scrabble on Christmas Eve-Eve but that is how the film starts; Holly, Cali and Mel are playing the board game after a family meal. They retire to the sofas having pigged out before stepping outside for a joint (this is more like it). Mel’s (Molina) younger, teenage brother goes out with them to try and get in on the action (it is a shame that he isn’t seen again after this scene because there was good chemistry between his character and the girls). Cali (Turshen) suggests that they leave the house and get the party really started, despite the fact that the other two girls really just want to fall asleep. The tough and often outrageous Cali suggests they go to her rich uncle’s house whilst he is away.

On the way, in the darkness of their surroundings, they pass a mysterious old, haggard looking man beside his truck, which has broken down. He seems creepy, he seems to have crawled straight from a stereotype in any other horror film and Cali knows this. She slows down beside the man, freaking out the other two girls before speeding straight past and towards the beautiful big mansion of her uncle’s. After finding the key and getting inside, they help themselves to the alcohol and dance around, taking full advantage of the beautiful house. Cali describes driving the sexy sports cars in the garage as something that is likely to bring her to orgasm, of course a titillating combo for the the audience! When Holly (Rogers) notices that the family pictures are of an Asian family, she confronts Cali who reveals this is actually the home of a family she used to babysit for. After this little revelation, a crash and a man looking for whoever is in the house disturbs the girls. They run past him on the stairs, except when he grabs Holly, she panics and pushes him to the ground. He falls to the bottom and appears to have died. Now the question is, what are they to do with the body?

The film jumps gracefully along, mainly down to Cali, throwing ideas about what they should do next. Do they run away, call the police and admit they 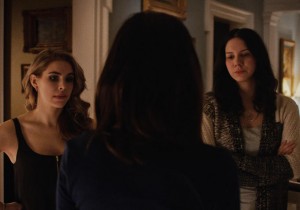 broke into the house or do they accuse the man apparently dead of rape? One after the other, the twists create a compelling and often shocking story, which is bound to keep the audience entertained until the very end. Of course, nothing is as it seems and Body turns into a tale of what people will do to save themselves and as quickly as possible.

All three girls are great to watch but it is Turshen’s performance as Cali, which really keeps the momentum of the story going. She is bold and feisty, coming up with idea after idea and she doesn’t really care who gets burnt in the process as long as she gets away safe. She sets the screen alight and certainly seems like a keen new participant for future scream queen.

For the entertainment factor alone, Body is worth a watch; it is likely to cause a few gasps, some laughs and a good time. Plus more importantly, it is a great introduction to a pair of directors, who are likely to go on to create something really interesting and improve on their technique over time.