A Pistol for Ringo & The Return of Ringo Blu ray review

A double header of Italian Westerns. One very good the other on a par with lesser works. A PISTOL FOR RINGO follows a well known and feared gunfighter known as “Angel Face” or Ringo. Arrested for manslaughter and left in jail to await trial. When a bank robbery forces the sheriff out of town, Ringo might be about to become an unexpected hero. THE RETURN OF RINGO finds Ringo back After fighting in the American civil war. He is still a marked man for his past and Ringo returns home to find his property overrun with Mexican bandits. His fiancee has been forced into marrying a Mexican gangster behind all this. Going undercover as a Mexican labourer, he will reclaim everything or die trying. 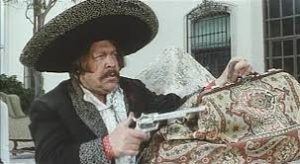 The Ringo films are part and parcel of the high point in Italian Western cinema. From Django (released the year after) and Sartana (three years after that) series in the genres well known collections. This is as well known but far lesser seen as the others however. Often because the others have big champions or releases in the UK. Having never seen either films, I was eager to watch. A PISTOL FOR RINGO is a very under whelming feature. Erratically paced, irrationally scripted and with action scenes that are over long, it can be a test of patience. Some will challenge me about this. 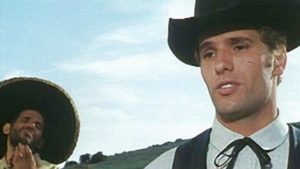 Simply because they are often overly protective of westerns from the period. The argument is often that it is not being read from its time frame but it is and I have to say the film does not work. I get it a classic but it just falls flat on the audience.  THE RETURN OF RINGO becomes a completely different film.  You have everything opposite from the first film. It is clever, well written story. Here we have a well paced and skilfully executed feature. The violence is fierce and it underscores a bold revenge film. The plot punches into its genre and troupes but also makes them feel fresher. A rare occasion that a sequel is a lot better film. Its a great film compared to its original.  It has the Greek tragedy elements and overall it is better at everything. Utterly brilliant film. 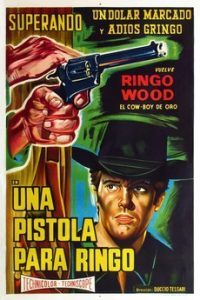 To the transfer. No comparison is available for me but I can say that both look very good. Grain has been kept. With sun bleached vistas having not only a washed out centre but lush vegetation in their centre. The browns and dusty grey of DVD have changed and become stunning. In truth  A PISTOL FOR RINGO is just ahead of this but only because of some of the wonderful vista scenes. The soundtrack which features a Morricone score that is big and on par with his later scores.  C. Courtney Joyner and Henry Parke commentary really made for some delicious historical analysis. The two are experts in their field and also I feel fans of the films. After you finish it, you might be to. They Called Him Ringo is less worthy of time. Sadly t feels dated and heavy. A Western Greek Tragedy is excellently pieced together. I would recommend starting here. Revisiting Ringo sees Tony Rayns at his most clear. He is a fan and that shines though. This makes it rewarding more than a dry version of facts and figures. Then finally you have a booklet with Howard Hughes essay. Well worth an overview. 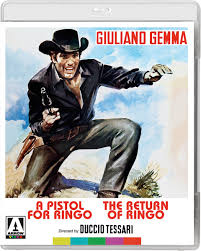