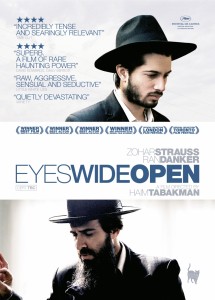 Here is your lucky day, so early on in the week this time!

It’s that time again where we give you another Peccadillo Picture film through the medium of the internet – you can buy or rent the movie right now through your computer box thing!

For the third week, we have decided to give you the cult classic, Eyes Wide Open, which follows Aaron, a married butcher working in Jerusalem’s Orthodox community, who is respected by friends and family – a pillar in the community. However, when he hires handsome runaway student Ezri to assist with his business, sexual tensions bristle, and the pair cautiously embark on a love affair that must be kept hidden at all costs.

Meanwhile, a neighbouring shopkeeper persists in seeing a man of her own choosing, even though she’s been promised by her father to another. As forbidden truths come to the fore, these lovers are forced to either confront or relent in the face of a centuries old religious community, with startling results.

A beautifully affecting love story that has rightly earned comparisons to Brokeback Mountain, Haim Tabakman’s potent yet impeccably restrained tale has won awards and accolades at film festivals the world over.