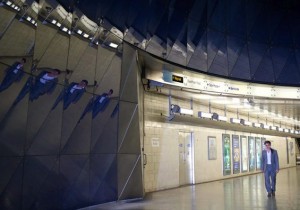 It has been a bit of a ride during these past few years for Mr Danny Boyle; no matter what people think (myself included), he has continued to ride pretty high since Slumdog Millionaire in 2008. Along the way, there was 127 Hours starring James “between a rock and a hard place” Franco, the National Theatre’s adaptation of Frankenstein, the Opening Ceremony of the 2012 London Olympics and the announcement that Boyle will be directing the sequel to his seminal Trainspotting. Now, whilst everyone else was marvelling at the work he did on a national stage last year, he was also very busy working at the same time on this, his latest picture, Trance, starring James McAvoy, Vincent Cassel and Rosario Dawson.

On the tin, this psychological thriller is a non-stop thrills ride, filled with action, sex, a stunningly shimmery look at London and a true return to genre movies but unfortunately for me, Trance, felt a little too glamorous with very little notice of good storytelling… or a good story. Truth be told, Boyle does know how to make a good movie, they are entertaining and they look wonderful. His cinematographer, Anthony Dod Mantle, can be very proud of the way in, which they managed to make each and every scene look as if it had been freshly unpacked and delivered from Habitat. It shines and it gleams, but sometimes the surface just isn’t enough and unfortunately, I found this was the case.

Without giving too much of the story away, McAvoy plays Simon who works as a fine art auctioneer but things become violent when a

masterpiece by Goya goes on sale. The opening sequences find Simon breaking the forth wall, and explaining to the audience what they are trained to do in the middle of an emergency – just in case someone tries to steal any of the paintings. He walks the audience through the methods, and makes it very clear that under no circumstances should the dealers try and take the law into their own hands – no piece of art is worth risking your life over. But things become twisted when Franck (played by the usually wonderful Vincent Cassel) and his team attempt to steal this unique piece of art. Simon jumps into action and tries to place the painting in the vault, but when Franck outwits him and the rest of the staff, it looks as if he is going to get away with the painting. Simon forgoes any of his previous training and thinks he can take Franck on… surprise, he can’t and gets knocked out. Next thing we know, Simon wakes in hospital after surviving the attack and Franck finds the case where the painting should be, empty. Confused yet?

When Simon returns home and find’s his flat is completely destroyed , he isn’t sure what to think. Then like clockwork, he is attacked again and captured by Franck and the gang. Turns out, they all knew each the whole time and Simon was in on the charade…  but Franck didn’t think Simon would outwit them. Problem now is that the punch to the head and the tumble has affected Simon’s memory, and he cannot remember where the painting is. Cue the very sexy Rosario Dawson, as Elizabeth, a hypnotherapist, Franck hires to help Simon recover his memory and find the painting. 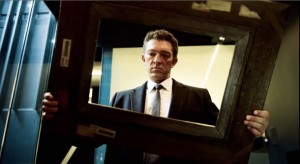 This is all within the first 20 minutes or so; what follows is a marathon of twists and illusions, making the audience believe certain things when in fact, they are watching something completely different. Delving into the memories of Simon seems simple at first, but as the boundaries between dreams and reality start to collide, no one is safe, no one is telling the truth and no one has any freaking idea what is going on.

As I write this review, I must admit that I am somewhat intrigued by the premise that I have set up. On paper, I will admit, it does sound interesting but unfortunately, the finished product fell short of what could have been greatness. The story goes too far to confuse, and instead becomes a mashup of Inception, with a touch of Cosmopolis and a sprinkle of Eternal Sunshine of the Spotless Mind. Except it goes so far to embroil the audience in the confusion of the story, that you walk away thinking Boyle has just tried a little too hard on this. The story certainly doesn’t stick with you, but instead there are moments, much like Rosario Dawson’s completely naked sequence (this may be enough of a reason for someone to check this one out) or one of the highly dramatic dream revelations, which reoccur throughout the film but when you think of moments rather than the entire film, you know you have a slight issue on your hands.

Acting wise, no one stood out – they were all rather entertaining but certainly a touch forgettable unfortunately, especially when you have such a brilliant cast. McAvoy, yet again is hired as the geek/small guy/nice one who is done wrong, and becomes stronger/violent/mean – because we haven’t seen that before and although he does it very well, it doesn’t seem enough to save this. Even Cassel at points seems a little bored and confused by what is going on – he carries his scenes like a true professional, but I feel as if he never completely cares about what is going on.

The film’s biggest issue is that it is really a chaotic arrangement, where it doesn’t truly know it is trying to be. Art heist, psychological 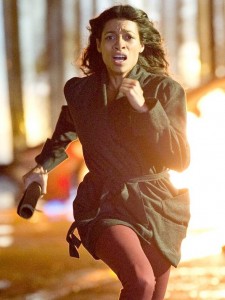 thriller, erotic drama? Your guess is as good as mine, all I know is that it was carried by a heavy, house soundtrack, which much of the time was a touch overbearing and wasn’t used particularly cleverly but instead to try and force suspense and horror into the mind’s of the audience. Unfortunately, the weakest characterisation could have been the strongest, and this was Dawson’s femme fatale, Elizabeth who could have been a strong, powerful women but instead, she also was a little confused at what she was trying to be and instead never quite becomes what she sets out to be. She seduces, pointlessly and flirts, harmlessly.

Despite the convoluted story, Trance is a very stylish and sexy film, with moments of genius in the ways that London is portrayed. Boyle really does admire the city, and it is clear in his films, that he knows this city and wants to show audience’s new ways to understand the ways in, which it works. Compare, just for a moment 28 Days Later (the sequence, where Cillian Murphy just wanders through an empty city) with the harsh, sensual and provocative London of Trance and you start to understand just where Boyle is coming from. There is a sheen to the film, I cannot argue that, and it is very lovely to look at but unfortunately, sometimes that just isn’t enough.

Trance is watchable, it isn’t the best thriller of the year, but I am sure there are many worse to come. Danny Boyle does a fine job, showing what he can do when he is both directing a highly paced, complicated thriller, along with the Opening Ceremony of the Olympics, but it just doesn’t come of as gold place (see what I did there?). In places, brilliant but overall, a convoluted thriller, which says very little but is very, very shiny.