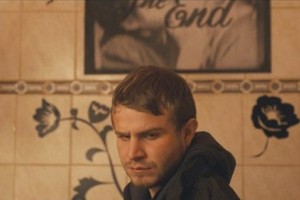 Where do I start with a review of Antonio Campos’ (Afterschool) hair-raising drama, Simon Killer? I knew little about this film when I entered the cinema today, there wasn’t a poster, there is very little online and I had avoided the trailer; to be able to walk into the cinema with no expectations was an interesting experience. All I knew for sure was that the film starred Brady Corbet, who I had previously become fascinated with in Haneke’s remake of Funny Games. In Haneke’s film, Corbet was a cold blooded killer, shown with little soul but bags of horrifying attitude and layers of mental derangement that I cannot remember seeing previously in a film. I put this performance down to the director, and the nature of the film as a postmodern vaccine into a culture so obsessed with violence – after walking out of the cinema today, I realised this wasn’t the case but actually we may have one of the best actors of today showing what he does best and (fingers crossed) we may have another Ryan Gosling on our hands.

Simon Killer is the story of Simon (obviously) who travels to the city of love, Paris, after his five year relationship with his girlfriend (never seen or heard on screen) ends. The collapse of the relationship has seriously affected Simon, he has had to move out of the apartment where they live and back in with his parents, as well as this, the breakup seems to have both emotionally and mentally affected Simon who seems to be living in a very dark place. This is the backdrop for the film, which in all serious, is a study in madness; we watch, over a period of a few months, how this dark depression can turn a man into a killer.

Whilst in Paris, Simon meets a prostitute called Victoria (played the extremely beautiful Mati Diop) who at first is a means of getting physical, of getting human contact and of becoming closer emotionally to allow himself something more than just his own headspace. But after a while, the pair become more than client and worker; instead they allow themselves to enter a full relationship where they live together. After planning a way to coerce one of Victoria’s clients out of money, they realise she doesn’t have to continue sleeping with men for money and they can live happily (or as happily as a couple living on the edge can).

But constantly throughout the film, and the relationship, we see Simon change. He becomes manipulated by the situation 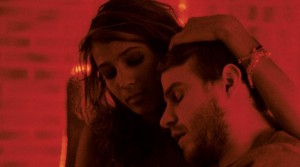 and manipulates the situation himself. He wants sex, he wants emotion, he wants danger; he want’s it all! When tragedy strikes, he gets to know another girl, Marianne and the relationship he tries to force with her.

Looking at the film itself, it’s hard to pin down just one or two different influences for the film. As soon as the images and sounds (which although played together, have double the power as separate entities) start, I sensed a strong Lynchian undergrowth in the film. Not only cinematically does the film scream Mullholland Dr. & Inland Empire, but thematically, the film doesn’t want to show you a picture perfect Paris, but instead the screaming, hollering, hatred of humanity that Lynch embodies in Blue Velvet. The film also wrestles with Simon’s own version of reality, how his psychotic nightmare takes over slowly, which reminded me of the writing of Bret Easton Ellis, but also the film adaptation of American Psycho. There were also specific movements throughout the film, where the camera itself becomes a component of a severe moments in the film, rather than recording these parts for the audience, it’s like the camera and audience are actively taking part in Simon’s emotional turmoil; this felt like the work of Noe and specifically, like some of the movements of Irreversible. Finally, the sexual scenes in the film are somewhat reminiscent of McQueen’s Shame, taking all the sensual eroticism out of sex and instead making it seem like a basic, animal instinct with little or no glamour. (Now, if that doesn’t interest you, I don’t know what will!) 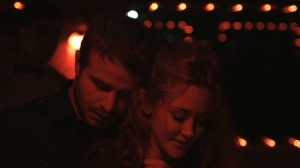 The performances were another part of the film, which made this my highlight of the London Film Festival. Brady Corbet runs savage, wild and emotional throughout the film; managing to make the most highly octane moments of this film still feel emotionally viable and sustainable, whilst making the more insular, quiet moments feel like the most tense, chilling and suspenseful parts of the film. Simon never looks directly into the camera, the audience can never quiet see his eyes and what he is thinking, which is really interesting because we are told several times throughout the film that he has just finished college where he specifically studied the relationship between the eyes and brain. This analogy and the themes of distance and seeing and spread widely across the film, and you do snigger a little to yourself when you see the connections and the mentions. Also, Corbet portrays the deadly motivation for a psychopath so brilliantly – he looks cold and ill, and it seems he really enjoys delving into the innermost crevices of the madness surrounding him.

Diop’s performance as Victoria is also stunning; she looks glamourous but also hurt from the life she has had to live. From a losing a child, to divorce and now coming to Paris to try and live alone, she is broken and as soon as the opportunity to be rescued comes along she takes it with both hands (and legs). She spends the first act of the film as the prostitute, she knows that has a role to play in the lives of these men but in the second act, she becomes lost in a love story with Simon that isn’t good for her and Diop balances her emotion with confusion and ends in a sea of hatred.

Another element of the film, which made this experience so emotionally shattering and exciting was the incredible 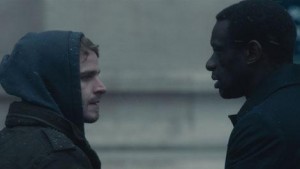 soundtrack of the film, which concentrated on mirroring the emotions of the characters as well ‘pulling’ the audience out of their seats. At the time of writing, I cannot be sure who did each of the tracks but I know that the score was composed by Stenfert Charles (Saunder Jurriaans and Daniel Bensi), who previously did the score for Martha, Marcy, May, Marlene (which also starred Corbet). The music varies from dub step, bass tones, to more light hearted (ironically so) popular sounding tunes, which also carried Simon Killer‘s emotional undergrowth.

As emotionally compelling, and visually stunning; Simon Killer stands out as an art house film, offering visual, audio and thematic pleasures and leaves the audience feeling both scared and empathetic to the character of Simon as he tries to work his way around this new world of his.